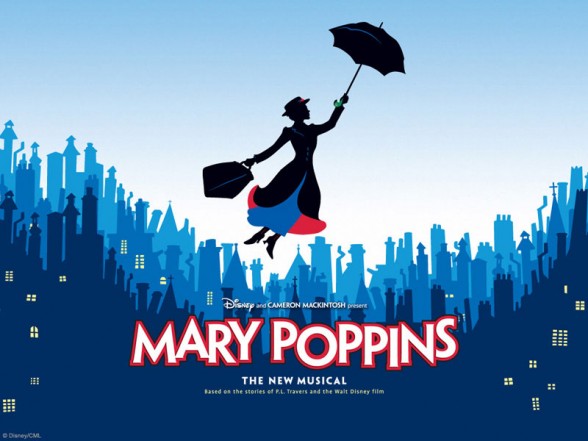 “Chim-Chim-Cher-ee”… “A Spoonful of Sugar”… “Supercalifragilisticexpialidocious” — who doesn’t remember these timeless songs from the 1960s film classic, “Mary Poppins”?
.
Well, thanks to the stage version of “Mary Poppins”, now concluding its fourth year at the New Amsterdam Theatre, they’re back — and along with some other songs from the movie, plus a handful of new ones, what a tuneful lot they are.
.
British actress Laura Michelle Kelly plays the magical Mary with just the right mix of twinkly-eyed mischief and tantalizing mystery; save for the occasional suggestion of a past relationship with perpetually cheery chimney-sweep Bert (the charming Gavin Lee), nothing about her previous life is ever even hinted at.  She can pull furniture out her hat like rabbits, make toys come to life, fly like a bird, and keep the previously hard-to-control Banks children, Michael and Jane, under her thumb with little more than a wink, a song, and a smile, but there isn’t a whole lot we actually KNOW about her… which only makes her that much more intriguing.
.
Kelly is wonderful; beautiful, golden-voiced, and surprisingly subtle, she does such a fine job that it is impossible to take your eyes off her.  Nor can you ignore the children, portrayed at the performance I attended (the roles are played by a rotating cast of young actors) by Catherine Missal and Ethan Haberfield, neither of whom looked much older than ten or eleven, but both of whom can sing, dance, and, most importantly, act.  Whether sharing the stage with their more experienced co-stars, or up there by themselves, they more than held their own.
.
And ignore at your own peril the wonderful Valerie Boyle as the Banks’ long-suffering housekeeper, Mrs. Brill, and Ann Arvia as the “holy terror” of replacement nannies, Miss Andrew (the mere mention of her name causes grown men to tremble), whose “brimstone and treacle” philosophy of child-rearing raises villainy to near-operatic heights.
.
Karl Kenzler and Megan Osterhaus as Mr. and Mrs. Banks, a Victorian couple in the throes of a marital crisis, are wonderful, too. The costumes are colorful, the sets are magnificent, the dances are real show-stoppers (the second act chimney sweep number, “Step in Time”, is Broadway-style hoofing at its best, and not only because Bert spends part of it suspended upside-down, tap-dancing — tap-dancing! — on the proscenium), and Mary herself… well, when she flies, she really flies (at the end of the show, she soars up to the balcony with a breathtaking ease that would put Elphaba of “Wicked” to shame).
.
“Mary Poppins” — a good old-fashioned musical with a heart — is, to quote a line from one of its many delightful songs, “practically perfect in every way”, indeed.
. 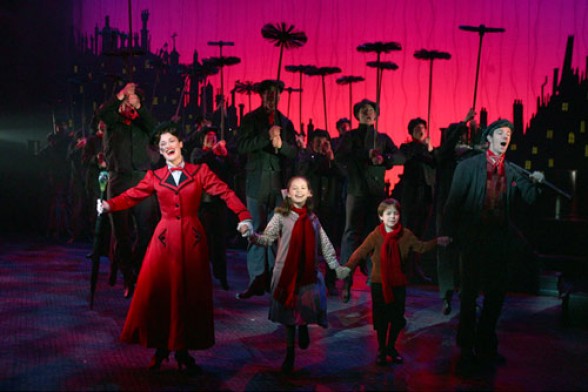