Mamma Mia, this show has legs! 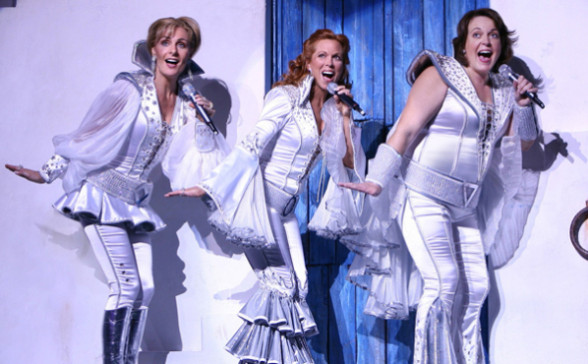 In case you’ve been living under a rock — or perhaps on some faraway planet where Swedish pop bands have never ruled the charts — the ABBA-inspired jukebox hit, “Mamma Mia!”, is in its thirteenth year at Broadway’s Winter Garden Theatre, and shows no signs of running out of steam … or glitter.

Sure, the story is as thin as ever — a young girl, about to get married, invites three men from her mother’s past to the Big Event, not knowing which of them is actually her father; comedy (and much singing) ensues — but no one has ever bought a ticket to “Mamma Mia!” expecting a plethora of plot twists. Nor, for that matter, has anyone ever left a performance of “Mamma Mia!” waxing eloquent about the acting; on the evening I saw it, the cast was game and the performances were fine, but they were overshadowed (inevitably) by the bouncy, toe-tapping score.

It’s the score, of course — pulled right from ABBA’s catalog of hits — that sells the show: “S.O.S.”, “Take a Chance on Me”, “Dancing Queen”, and the titular “Mamma Mia” … they’re all here. Some, I’ll admit, were unfamiliar, and more than once I wished ABBA was up there (or even, heaven help me, an ABBA tribute band) belting out the tunes themselves, but still: it’s hard to attend this jukebox jubilee and not want to (happily, and with abandon) sing along.

Bottom line: “Mamma Mia!” is a rousing crowd-pleaser part of the time, a bit of a drag at others. Don’t leave before the curtain call, however; the final bows are very nearly worth the price of admission alone, and the roof-raising, post-curtain call finale, a full-cast version of “Waterloo”, is more exciting, and more fun, than just about anything you’ll see on Broadway all year. 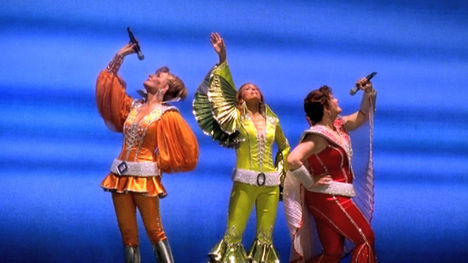