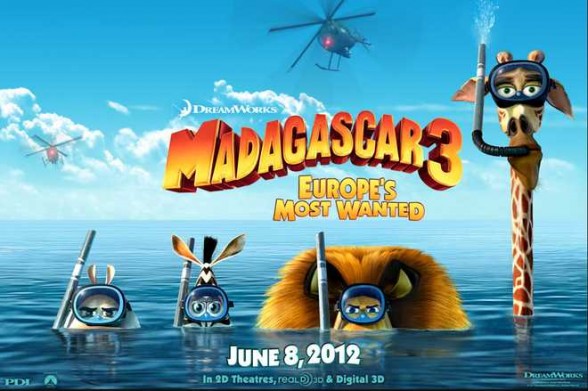 Roar, roar, the gang’s all here — Alex the lion and his band of four-legged (and two-winged) friends, that is — in “Madagascar 3: Europe’s Most Wanted”.
.
As the movie opens, they’re still in Africa, pining away for New York and staring wistfully at mud models of the Manhattan skyline. When the penguins (still the cutest and cleverest of the bunch) fly off to Monte Carlo to hit the casinos, Alex and his pals go after them — swim after them, actually — not because they want to take a crack at the roulette tables, but because the penguins have the plane … and they need the darn thing to get back home.
.
One surprise appearance on the casino floor later, they find themselves in the crosshairs of Captain Dubois, the local animal control specialist, who’s got a sneer and a snarl and a dogged determination to add Alex’s head to the trophies on her wall. Before you can say “Blackjack!” off they go, into the streets of Monte Carlo with Dubois in hot pursuit. Attempting to hide, they hook up with a down-on-its-luck travelling circus, and Dubois chases them with a near-operatic intensity, through Monte Carlo, then Italy, into London, and finally even New York. Hilarity (or moments of it, anyway) ensues.
.
The acting is fine, Ben Stiller, Chris Rock, Jada Pinkett-Smith, David Schwimmer et. al. doing what they can with an essentially uninspired script. The real stand-outs, however, are Frances McDormand as the delightful Dubois and Bryan Cranston (TV’s “Breaking Bad”) as Vitaly, the melancholy tiger, once the top act in his woebegone little circus, the one performer the whole world came to see, but ever since a horrifying accident years ago, has been sulky, brooding, and mean. McDormand and Cranston very nearly steal every scene they’re in. Watch for them; they’re a hoot.
.
“Madagascar 3” may not be the most exciting animated movie of the year — it may not even measure up to ‘Gascars 1 and 2 — but it’s a pleasant enough way to spend a fast ninety minutes, and best of all, you might end up enjoying it as much as your kids.
.
“MEN IN BLACK III”

“Men in Black III” is a mix of aliens (of course), time travel, invasions from outer space, and, reprising once again their roles as Agents J and K, Will Smith (affable as ever) and Tommy Lee Jones (reliably humorless). This time around, a one-armed baddie has escaped from prison (on the moon, no less) and come to Earth to travel back in time and kill Agent K and — not insignificantly — have another go at facilitating the full-scale alien invasion that the MIB thwarted years ago. Smith hurtles through time to save his buddy, meets the younger Agent K (Josh Brolin, as grim and joyless as his older self, if not worse), and even gets to the bottom of the Big Secret his partner has been keeping from him all these years. Emma Thompson appears as their boss, Agent O, and — in a growly, over-the-top, teeth-gnashing performance that just about steals the film — Jemaine Clement is the vengeance-minded meanie who sets the whole thing in motion. An intermittently funny film, but nothing we haven’t seen before, at least in terms of the FX; and when the best thing about a movie is a supporting character who isn’t even onscreen very much — that would be the snarling and sadistic Clement — there’s something wrong in Monsterville, for sure.

“Rock of Ages” is a nostalgia trip, an ode to the hair-band power ballads of the 80s, brought to us by director Adam Shankman (“Hairspray”) and starring Julianne Hough, Diego Boneta,  Alec Baldwin, and — yes — Tom Cruise. As starry-eyed young Sherrie, who steps off the bus from Kentucky right onto Hollywood’s Sunset Strip, Hough is blonde, beautiful, and buoyant; unfortunately, she barely looks tough enough to wait tables (which she ends up doing), let alone find fame and fortune as a rock goddess (which is her dream). Boneta, who does look like a rocker — albeit a wholesome and doe-eyed one — handles the 80s-era anthems nicely. Baldwin, all long grey hair and haggard, worried demeanor, riffs on his role on “30 Rock”; as Don Dupree, the owner of the Bourbon Room, the club where the action takes place, he is still the businessman, the boss, the guy who has to make all the tough decisions because — well — he’s the dude in charge. And Cruise, naked, tattooed torso, toothsome primate pal, overdeveloped libido and all, is, when you get right down to it, really just spoofing his own cultural icon persona. One point in his favor: he’s playing a type that — behaviorally, physically — he’s never played before, and clearly, he’s having a helluva time doing it. Malin Akerman as Cruise’s Rolling Stone inquisitor-turned-lover, and Russell Brand as Baldwin’s pep-talking, Cockney assistant turn in servicable, if disappointingly broad performances of their own. Same for Catherine Zeta-Jones as a crusader with a secret, and the ubiquitous Bryan Cranston as her husband, the clueless and two-timing mayor.

.
Even as you wait for the songs to come up (as I did), you begin to regret, after a while, that they’re not the originals. (Where’s Poison and Bon Jovi when you need them?)
.
“Rock of Ages” is entertaining in spots, but not, unfortunately, a very good movie.
.
FILM REVIEWS by Stuart R. Brynien