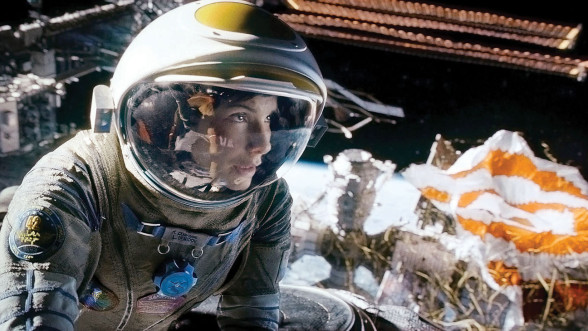 Sandra Bullock is Dr. Ryan Stone, a mission specialist who, as the action begins, is making repairs outside her spacecraft when a nearby satellite (“nearby”, of course, being a relative term; this is outer space, after all) explodes, sending waves of debris flying at her, damaging the craft and separating Bullock from her commanding officer, the morale-boosting, wisecracking George Clooney.  Soon, they’re floating off, helplessly, into the void.  What follows is one cliffhanger and hair’s-breadth escape after another as Bullock, at first with Clooney and then alone, battles for survival.  Will she make it back to Earth? Or will the stars claim another victim? (The third member of their crew has already perished.)

Bullock is one of our finest actresses, and “Gravity”, to its credit, puts her front-and-center.  It’s a tour-de-force performance, really; for much of the action she’s completely alone, with only her own voice and a dizzying array of control panel gizmos and shipboard paraphernalia to keep her company.  (Two points: never mind the HAL-like talking computers–there aren’t any; and–spoiler alert!–she does manage to find refuge, barely, aboard a couple of abandoned ships.)  She’s scared (who wouldn’t be?) but also tough, spunky and resourceful; without a transporter beam in sight (call this movie the anti-“Star Trek”), or a Starfleet crew within hailing distance to ride to her rescue, she has to call upon her own reserves, her own know-how, to remain alive…if she can.

Thanks to Cuaron and his crackerjack team of designers, “Gravity” also has an amazing, even awe-inspiring, look. Earth hovering in the background during the nail-biting opening moments; Bullock and Clooney tumbling off into the blackness again and again, becoming tinier and tinier with each passing moment; entire space stations falling apart at the seams after being pummeled by swarms of deadly debris.  There’s a little of “Life of Pi” here; it all looks incredibly believable, yet none of it, of course, is real.

The details are extraordinary, too: our heroes don’t merely soar through space, they somersault, head-over-heels and in slow motion, owing to the lack of gravity; when Bullock gasps for air, we can see her breath condensing on the front of her helmet; when a hatch suddenly appears to pop open late in the film, all sound, every bit of it–because, after all, this is space, where no one can hear you scream–abruptly, and completely, disappears.

No exploding planets. No alien life forms. Just a big story, set in the vastness of space, told in the most intimate way–from the point of view of a desperate traveller stubbornly trying to find her way home.

At a fast-paced and action-packed ninety minutes, “Gravity” is one of the most original films of the year.