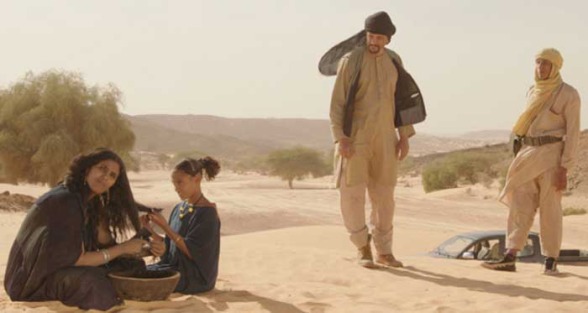 Even as a relatively well informed human being, it can be hard to really understand the dynamics of the world that surrounds us, especially on a global scale. And in a time of (superficial) political “correctness”, and social media-based political “activism”, it is inevitable to be bombarded with massive amounts of arguably regulated “information”.
.
It is my belief that one of the possible goals an artist can set for themselves is that of using their voice, through art, to spread awareness and clarity on issues they have deep understanding of. I can only guess this might have been the intention of Mauritanian director Abderrahmane Sissako, (also co-writer) and his co-writer, Kessen Tall, with Timbuktu, but what I am certain of, is that from within the mediatic whirlwind of socio-political (non-) information I find myself in when seeking information on those regions, this film offered an aesthetically stunning, deeply human portrayal of the Malian city Timbuktu.
.
Contextualizing is fundamental to understanding this film, and although it could be said that this means Sissako is preaching to the converted, those who seek to inform themselves, he manages to do so with subtlety and a poetic touch.
.
This is the story of cattle herder Kidane (played with depth and nuance by Ibrahim Ahmed), who is trying to live peacefully, not far from the city of Timbuktu, with his wife Satima (portrayed with dignity by Toulou Kiki), his daughter Toya (played with charm and freshness by Layla Walet Mohamed), and their shepherd Issan (Mehdi Ag Mohamed). The area has been losing residents, who flee in fear, ever since the nearby town has been occupied, and is now ruled by religious fundamentalists who make life difficult for the people, banning music, cigarettes, laughter, and even soccer. The jihadists come up with spur of the moment laws and rules that enable them to ulteriorly repress the people, especially women, and the peacekeeping efforts of the Imam (played with great empathy by Adel Mahmoud Cherif) serve to little avail.
.
Aside from the occasional visit as suitor of Satima by Jihadist Abdelkerim (sensitively portrayed by Abel Jafri) while Kidane is gone, he and his family are for the most protected from the chaos of Timbuktu, however, a quarrel with Omar, the local fisherman (the intense Cheik A.G. Emakni) over a dead cow quickly changes their fate.
.
Kettly Noels portrayal of Zabou, one of Timbuktu’s more eccentric inhabitants is certainly worth the mention, as she is one of the various elements Sissako masterfully provides in order to make this film easily watchable, despite its dramatic plot.
.
All in all, an informative portrayal of various aspects of Islam is painted, highlighting the colossal differences between the blood-thirsty extremists, and the peaceful, nonviolent majority. While Sissako confirms his mastery of the craft of cinema, this would not have been possible without the small, skilled crew he puts together. The incredibly beautiful images of cinematographer Sofian El Fani, and suggestive score by Amin Bouhafa are worth mentioning.
.
And although the film manages to not be overly gloomy, it must be said that original photography had to be moved from Mali to neighboring Mauritania because of the dangerous conditions that continue to exist in Mali, to this day.
. 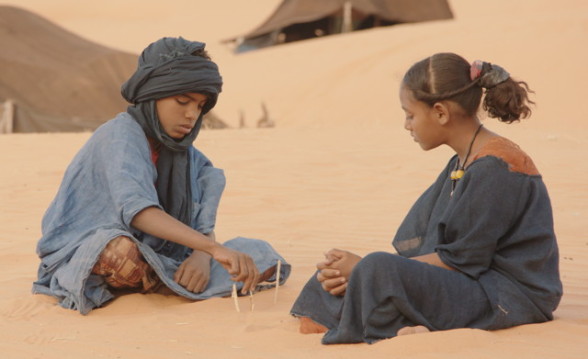 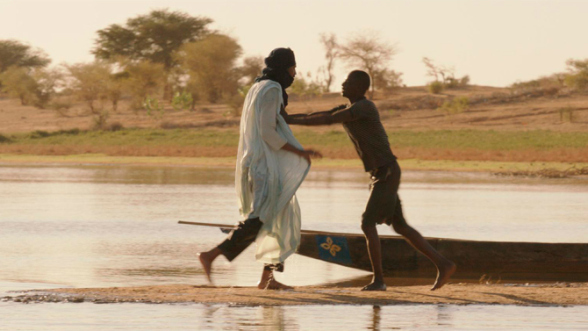