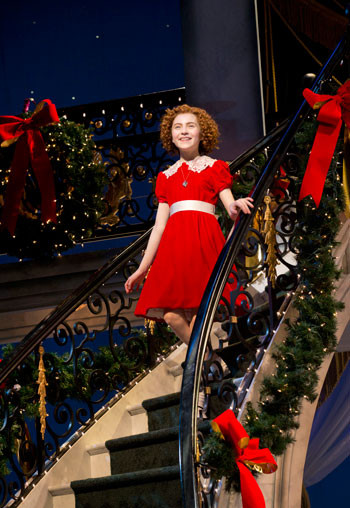 The sun has come out again–bet your bottom dollar, it has–shining as bright as a headful of carrot-red hair, in the current revival of the “Little Orphan Annie”-inspired, Depression-era musical, “Annie”.
.
When we first meet Annie, she’s the de facto leader of a rowdy bunch of orphan girls under the bloodshot but watchful eye of the hard-drinking Miss Hannigan.  There’s no love lost between Miss Hannigan and Annie–the little redhead has spunk to spare, for one thing, and is brave enough to talk back to her in ways her mates would never dare–but when Annie has the chance to smuggle herself out of the orphanage under a pile of dirty laundry, she grabs it.  Even when she’s returned to Miss Hannigan’s clutches by a well-meaning cop, all is not lost: no sooner is she back in the fold than word arrives that filthy-rich businessman Oliver Warbucks is looking for a luckless waif to spend Christmas with (and, not incidentally, help him smooth over his rather coarse public image).  Annie, lobbying hard for the gig, gets picked, she’s whisked off for two weeks with the Big Man himself, and–before you can say, “Leapin’ lizards!”–Warbucks decides to adopt her permanently.
.
A search for her parents (who are supposedly still alive), a Warbucks-sponsored reward of $50,000 to anyone who could help find them, a scam by a couple of dim-witted cons, a Christmas party to end all Christmas parties…what follows is one of the most feel-good, family-friendly musicals ever written.
.
As Annie, Lilla Crawford is bold, big-voiced and brassy, perfectly capturing the New Yawk accent of  a streetwise, Depression -era orphan; Merwin Foard, subbing for Anthony Warlow in the bigger-than-life role of Daddy Warbucks, puts his considerable stage presence and rich baritone to spectacular use (and has a couple of touching moments with Annie, as well); Clarke Thorell and J. Elaine Marcos as Hannigan’s con artist jailbird brother, Rooster, and his delightfully daffy girlfriend Lily, are as funny as you’d expect them to be; Sunny the dog is an absolute charmer–and as tuned into her blocking assignments as anyone on stage–as (arf!) Sandy; and the rest of Miss Hannigan’s mischievous little brood are crowd-pleasers, every one.
.
The real star of the show, though, is TV vet Jane Lynch (Sue Sylvester on “Glee”) as the sneering, scene-stealing Miss Hannigan.  With every over-the-top gesture, every braying laugh, she chews the scenery, spits it out, and chomps down on some more.  And–fans of “Glee” will know this already–she can sing, too.
.
Aside from a handful of songs–“Tomorrow”, “It’s a Hard-Knock Life”, and maybe one or two others–the score isn’t exceptionally memorable; the book by Thomas Meehan jumps from plot point to plot point a bit too abruptly; and its cloyingly sweet look at good old-fashioned American optimism is enough to give you a sugar rush.  (Annie in the White House, giving a pep talk to FDR and his cabinet, AND serving as the inspiration for the New Deal? Yikes!)
.
Still, it’s got singing, dancing, comedy, a happy ending (naturally), an adorable dog, and a tough little redhead anyone would admire.
.
And what’s wrong with that?
.
(NOTE: Jane Lynch’s final performance will be on Sunday, July 14th.)
.
“THE COMEDY OF ERRORS”

Equally charming is the first Shakespeare in the Park offering of the summer, “The Comedy of Errors”.  Two sets of twins–one the servants, the other their masters–1930s gangsters (director Daniel Sullivan has given the play, one of Shakespeare’s earliest, a distinctly “Guys and Dolls”-type vibe), lusty wenches, clueless cops, confusion and befuddlement at every turn as one twin keeps being mistaken for the other…this production packs an awful lot into a fast-paced ninety minutes, including fine comic turns by Jesse Tyler Ferguson (TV’s “Modern Family”) as the servants, both named Dromeo, and Hamish Linklater (“42”) as Antipholus. It’s even got some high-spirited dancers performing to the music of the period, not only before the tale begins, but also during the swift (and frequent) set changes.  Is it a great show? No.  The Bard was very much on a learning curve here; his true masterpieces came later.  But for what it is–pure, unadulterated entertainment–it succeeds beautifully.

(NOTE: “The Comedy of Errors” played its final performance on June 30th.  The next Shakespeare in the Park production, a musical version of “Love’s Labour’s Lost”, opens July 23rd.)