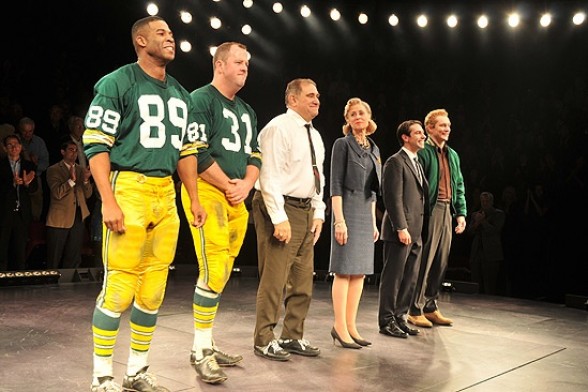 Back when I was a kid, my favorite football team — aside from the hometown Giants and Jets, of course — was the Green Bay Packers.  They had already won the first two Super Bowls.  Their quarterback was Bart Starr, one of my favorite players.
.
And their coach was the man who popularized “Winning isn’t everything, it’s the ONLY thing” — the rough, tough (and sometimes gruff) Vince Lombardi.  In time, based on all that I read and heard about him, I became HIS fan, too.
.
Now, decades later, a new play has made it to Broadway (better late than never!), and it is as fine a look at the football life as you’re ever likely to see.
.

Eric Simonson’s bio-drama “Lombardi” stars Dan Lauria, who bravely and unapologetically puts the man’s flaws and foibles on full display.  (Toward the end of the evening, one of his admirers calls Lombardi “the most IMPERFECT perfect man” he’d ever met; it is as accurate a description of a man whose angels and demons were constantly clashing with each other as any.)  He is middle-aged when we meet him, on the cusp of taking over the losing Green Bay franchise after an assistant coaching gig with the Giants.  He is a bully, and stubborn to a fault: not only does he poke his nose defiantly into everyone’s face even during the most innocuous of conversations, but he steadfastly refuses to see a doctor even after years of stomach pain, a stubbornness that eventually — at the age of fifty-seven — leads to his death.

.
Lauria’s Lombardi can be charming and witty one minute, explosively angry the next.  Cursed by both a hair-trigger temper and an inability to accept any point of view save his own, he prowls around the stage like a grizzled old boxer itching to pick a fight in a bar.
.
Matching him every step of the way — refusing to surrender even when, blowhard that he is, he tries to shout her down (something he does quite often) — is his wife, the long-suffering Marie.  They battle over everything, including the presence of the young sportswriter who has been dispatched to their home in Green Bay to do a feature for Look magazine; he serves as the play’s narrator.  The Lombardis quibble, they quarrel, they go nose-to-nose, but — no matter how fast the fur flies — one thing is clear: they love each other, and no amount of yelling can tear them apart.  (And nothing, one senses, will ever convince Marie to leave Vince’s side and head back to New Jersey — even though, as she totters about the stage in her high-heeled shoes with a drink in one hand and a cigarette in the other, it’s clearly a notion that is never far from her heart.)
.

Lauria is excellent; he looks like Lombardi, he talks like Lombardi — he IS Lombardi.  Excellent, too, is Judith Light, who, as Marie, is both the perfect adversary for her overbearing husband and a surrogate mother for the young reporter as well as Vince’s “boys”.

.
The football players — real-life Packer greats Paul Hornung, Jim Taylor and Dave Robinson — all look (thank heaven) like genuine athletes, albeit athletes of a bygone era (translation: unlike some of the monsters roaming the gridirons today, these guys, at least, look HUMAN).  Bill Dawes’ Hornung and Chris Sullivan’s Taylor are particularly fine, the former as an easy-going party boy, the latter as a big, oafish country type who proves he is not nearly as dumb as he looks.
.
The direction by Thomas Kail (“In the Heights”, “Broke-ology”) keeps the action running smoothly, seguing from one moment to the next with ease, and David Korins’ minimalist sets — with, for example, the Lombardis’ living room featured prominently in one scene, and a pool table in another (and all the sets rising without a hitch from beneath the stage) — are impressive, too.
.
There is no real plot here; this is a slice-of-life drama focusing on the beginning of Lombardi’s rise to fame in Green Bay, and ending with a victory in one of the biggest games of his career.  (Oddly enough, however, NOT one of the Super Bowls.)  It is also a character study — about the men who play football, the visionaries who coach it, the folks who write about it, and the women who watch it all from the sidelines.
.
Sadly, the last years of Lombardi’s life are all but ignored, and his headline-making decision to retire from the Packers and join one of their fiercest rivals, the Washington Redskins, as well as his death shortly afterwards from cancer, carry no emotional weight, at all.
.
But that’s a small complaint, indeed.  The bottom line: “Lombardi” is a beautifully acted and ultimately moving piece of theater that is well worth seeing — whether you’re a football fan or not.
.
THEATRE REVIEW by Stuart R. Brynien
.