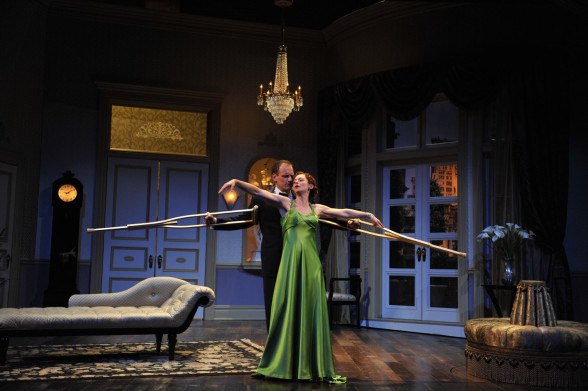 The action begins as Ada Wilcox (identified in the program only as “she”)–a 40ish actress returning to the audition circuit for the first time in years–arrives at a try-out for a horrible 1930s comedy that’s being revived, inexplicably, for a limited out-of-town run.  The session turns out to be a near-disaster, thanks in no small part to the borderline ineffectual director and a bumblingly inept line reader, but Ada, ever the trouper, lands the role anyway–only to discover at the first rehearsal that her leading man (obliquely referred to as “he”) is Johnny, her ex-lover from years ago, pre-husband, pre-teenaged daughter, pre-everything.

Sparks fly–ignited, at first, almost entirely by him, but eventually fueled by Ada herself–they wrap up the run, go on to co-star in yet another awful play, and, before you can say “Don’t do it!”, she leaves hearth and home and has an affair.

Jessica Hecht is funny, sweet and wonderfully expressive as Ada; she anchors every scene she’s in.  Dominic Fumusa–all square-jawed intensity and dark, smoldering looks–provides a fine romantic foil; Michael Cyril Creighton as the company’s utility player–here a lover, there a butler, everywhere a buffoon–is often hilarious; Patrick Kerr draws his share of laughs as the impossibly overmatched director; and Daniel Jenkins as the cuckolded husband offers some quietly effective moments, particularly at the end.  Emma Galvin, Clea Alsip and Todd Almond ably round out the cast.

Some of the physical comedy is positively inspired, and–ultimately–“Stage Kiss” (the title, by the way, refers to a daunting bit of stage business between the leading man and lady that has a hell of a time getting off the ground) has something important to say about love, marriage, and commitment.