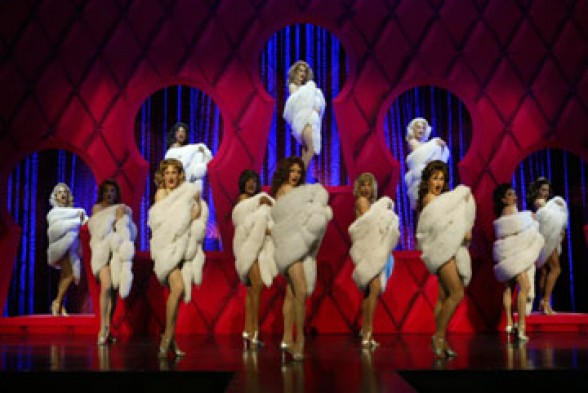 “La Cage aux Folles” is back on Broadway, and whether you are a fan of the show, a lover of good, old-fashioned, warm-hearted musicals, or just a TV junkie who might be wondering how well Kelsey Grammer — TV’s “Frazier” — can perform on stage, “La Cage” is, truly, a must-see.
.
The plot is simple: Georges runs a night club with the help of his headliner, the fabulous Zaza — who, when not in her make-up and garish gowns, is Georges’ gay lover of some twenty-odd years, the hyper-sensitive and oh-so-effeminate Albin.  When Georges’ son announces that he is coming to visit — the boy is the product of a one-night heterosexual fling that Georges enjoyed years ago — everyone is thrilled… until it’s revealed that he’s bringing not only his fiancee with him (he’s just recently gotten engaged), but also her disapproving, prudish parents.
.
What to do? Namely, how do Georges and Albin explain their relationship? How do they explain the naked statuary that decorates their apartment?
.
And how does the son, Jean-Michel, explain the man who “mothered” him all those years — Albin?
.

Grammer is terrific, a master of the acerbic aside and witty bon mot.  (Credit goes to the book writer, Harvey Fierstein, for coming up with some wonderful lines.) Clearly, he’s no singer, but except for one mildly jarring note in the second act, he sang more than well enough, flawlessly handling everything from the bouncy, feel-good “With You on My Arm” in Act I to the hauntingly beautiful “Look Over There” in Act II.

.
As Albin, British actor Douglas Hodge starts off a bit too strident, too shrewish, but once he settles down, and begins singing as both Zaza, and, in other scenes, as Albin (at times, it is when he brings his voice down to its more natural register that he sounds particularly fine), he is an unmitigated delight.  His first act finale, “I Am What I Am”, is delivered with all the rage and defiance one would expect (it’s not for nothing that this song has become a gay rights anthem), but his softer songs, sung in quieter moments, are just as powerful; Hodge isn’t just a Broadway belter, he’s also an interpreter of lyrics, and it shows.
.
Of course, even the most talented singer needs good material to work with, and “La Cage” boasts one of the best scores, musically and lyrically, ever written.  (A tip of the wig to Jerry Herman; this is one of his finest works.)
.
As for the Cagelles… this time, they’re all men, every single one of them, and they’ve got legs like Olympic weightlifters and abs like Adonises and they’re… well… as charming as ever.  (Each night, one of them chats with the audience prior to the show and mingles with the theateR-goers seated closest to the stage.  Actually, there was quite a bit of audience interaction at the performance I attended, all through the show.  It’s all hilarious, and in good, clean fun, but — be prepared.)
.
“La Cage aux Folles” isn’t merely about a gay night club owner and his drag queen lover: it’s about family, and love, and loyalty; it’s about fathers, and mothers, and sons.
.
It’s also just about the funniest musical — and, yes, the most moving musical, too — currently on the Great White Way.
.
(Note: Kelsey Grammer and Douglas Hodge are scheduled to appear through Sunday, February 13th only.  A new cast — including Harvey Fierstein himself as Zaza — will be stepping in on Tuesday, February 15th.)
.