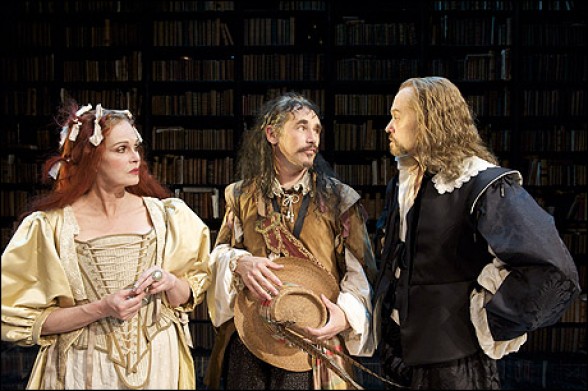 From its long opening monologue — an acting tour-de-force that takes up most of the play’s first half-hour — to its far more somber final moments, David Hirson’s rhymed couplet, seventeenth-century French comedy “La Bete” is one of the funniest shows on Broadway.
.
British actor Mark Rylance stars as Valere, an ill-mannered lout of the highest (or lowest) order, who seeks to join a famous acting troupe, much to the dismay of the troupe’s leader, the cultured, refined, and (in his own mind, at least) much more talented Elomire (the exquisite David Hyde Pierce).  The speech that begins the play is Valere’s, and it is a fart-filled, belch-laden, food-and-scenery-chewing extravaganza.  Valere even drops his drawers at one point and takes a moment to use a commode, and watching Elomire’s horrified reactions as his gauche visitor attempts to clean himself with whatever paper (none of it, sadly, of the Charmin variety) happens to be at hand, is entertaining, indeed.  (Let me amend that: watching Pierce’s Elomire THROUGHOUT Valere’s long-winded ramblings is a treat.)
.
Rylance is excellent: whether filibustering at the beginning or re-enacting, with help, a particularly awful little play he has only just recently had performed elsewhere, he is the centerpiece of the comedy, its core, its shamelessly mugging, bigger-than-life heart.  Foppish, a tad disheveled, completely delusional as to the extent of his own talent and yet willing to admit a FEW of his shortcomings — his devilishly annoying absent-mindedness, for example — he is the yin to Elomire’s yang, and so unlike his eloquent host in every way that Pierce’s character can only sputter in frustration practically every time Valere opens his mouth.  Pierce, so good on TV’s “Frazier” — and a top-notch Broadway musical performer, as well — matches his hammy co-star scene-for-scene, moment-for-moment, and, in his own subtle way, proves to be every bit the master showman that Rylance is.
.
Also wonderful, in smaller roles, are Joanna Lumley (of TV’s “Ab Fab”) as the Princess (who, in one of the evening’s funnier developments, turns out to be nearly as coarse as Valere), and the hilarious Greta Lee as Dorine the maid, who has the unnerving habit of speaking entirely in monosyllabic riddles. (Every “conversation” she begins very quickly turns into a kind of impromptu game show that only Elomire, who seems to be the only one who understands her, ever has any hope of winning.)
.
Mark Thompson’s set — with its towering bookcases bursting with volumes of all shapes and sizes — is perfect for a comedy about literature, philosophy, and drama, his colorful costumes are just as impressive, and Matthew Warchus’ direction keeps things moving merrily along.
.
“La Bete” — which means “the beast” in French — is scheduled to close January 9th.
.
Treat yourself this holiday season and see it!
.
THEATRE REVIEW by Stuart R. Brynien
.