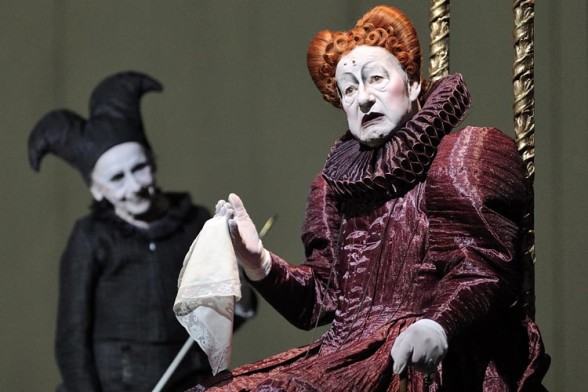 “The light and the dark of Shakespeare” are on display at Brooklyn Academy of Music this week as the Berliner Ensemble’s production of Shakespeare’s Sonnets directed by Robert Wilson with music by Rufus Wainwright comes to the Next Wave Festival. Performed in German (with supertitles) with the exception of interstitial bits by a German cabaret performer named Georgette, Shakespeare’s Sonnets is a carnival of strangeness that plays with contrast, gender, Shakespearean tropes, English send-ups and some truly beautiful songs and tableaux.

First performed in Berlin in 2009, BAM’s production marks Shakespeare’s Sonnets’ US premiere. The Berliner Ensemble and Robert Wilson’s last collaboration to be presented in New York was The Threepenny Opera at the Next Wave Festival in 2011.

While some songs have Wainwright’s signature sweeping style (Sonnet 29 “When in disgrace with fortune and men’s eyes” and Sonnet 20 “A woman’s face with Nature’s own hand painted”), others seem much more inspired by the company performing them and have atonal elements or a German cabaret vibe. The music is surprising throughout the performance, constantly playing with expectations and never quite letting the audience get comfortable.

Wilson appears to be exploring contrast and gender throughout the 2 hour and 45 minute show. The performance of gender pervades the piece with most of the actors playing parts in drag of some kind. An older gentleman plays Elizabeth I and Elizabeth II, a thing young woman plays “Poet” and looks like a silly Shakespeare doll, men dress up like Elizabethan ladies and girls dress and prance like Elizabethan boys. Contrast is also explored through the relationship between the music we hear and the stage picture we see. References to the Garden of Eden abound in one particular section, in another three men stand next to old fashioned gas pumps and sing a sonnet in a round.

Costumes and lighting are predominantly either dark colors or ivory, a contrast that becomes more apparent as the piece goes on. These reference the recipients of Shakespeare’s sonnets, the Fair Youth and the Dark Lady. In some sections, we seem to be seeing the two sides of one character (in one sonnet in particular Shakespeare is referring to a devil and we see an incarnation of a devilish cupid stirring up trouble—and there are many doppelgangers that are skewed in some way, either ). At times, props magically float to the sky or fall out of people’s hands, to the surprise and delight to the characters onstage. Delight, in fact, is a good world to use to describe much of the production. While there’s a wisp of a thread that ties the pieces together, it’s not a narrative thread, but an aesthetic one. Each sonnet section aims to surprise and delight, but are digestible pieces that occasionally reference previous pieces or characters, but are otherwise stand alone pieces. And as the pieces transition between light and dark, funny and poignant, obtuse and perfectly clear, the performance walks that wonderfully fine line between completely comprehensible and utterly alien. 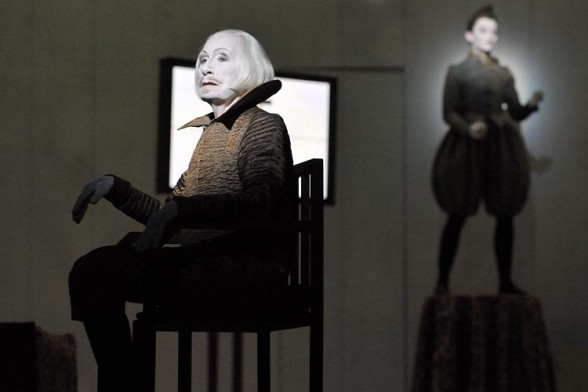