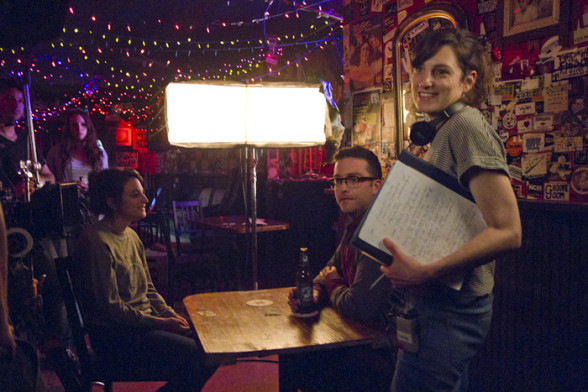 Obvious Child, a new feature film from Gillian Robespierre based on a short film with the same title, is about Donna Stern, a twenty-something stand up comedian and independent bookstore employee whose care-free and hilarious life is upended when she’s dumped by her boyfriend and then finds out that she’s pregnant after a one night stand. Knowing that she’s incapable of caring for a baby (let alone herself) she decides that she will get an abortion and receives support from her best friend Nellie (played with raspy knowingness by Gaby Hoffman) and gay best friend Joey (played by Gabe Liedman). The wrinkle in the narrative is that Max, the guy who impregnated her, seems to actually like her and pops up in her life determined to woo her.

Jenny Slate is honest and hilarious as Donna, with a bubbly pathos that makes even her terrible decisions seem entirely in earnest. But it’s Jake Lacy who really shines as the adorably patient and increasingly funny romantic lead. With his boat shoes, dimples and button down shirts he doesn’t seem to belong in this divey world of comedy, but it’s New York, it’s Brooklyn, so there he is, entertaining a client.

Richard Kind and Polly Draper play Donna’s divorced parents, who show that they have unconditional love for her but hope that she’ll rise above and out of her lost millennial status.

The joy of watching Obvious Child is seeing the way that romantic comedy tropes can be undermined and also utilized in fresh ways. The dialogue is clever without seeming overwritten and the love that the characters have for one another feels genuine. Donna’s journey is less about the abortion that she’s having and more about appreciating the people who care about her and letting go of the people who don’t treat her well.

While not a perfect movie (it’s a little slight and there’s one unnecessary curveball), Obvious Child captures millennial angst and fear in a captivating, funny and occasionally raunchy and scatological way. And it deals with abortion in a nuanced, smart and practical way.