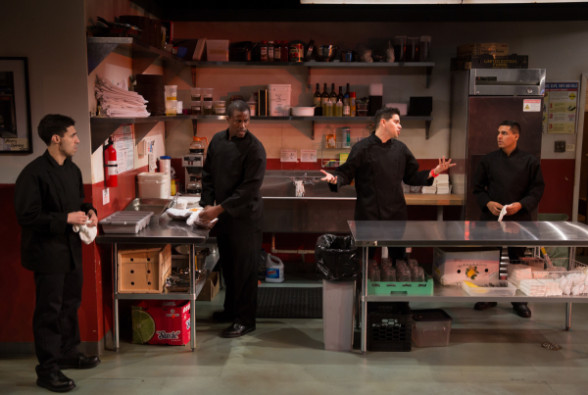 Elizabeth Irwin’s My Mañana Comes is a play about the politics of working in New York City as explored through the personal relationships of four busboys working at a Madison Avenue restaurant. Over the course of one summer, we come to know Peter, Jorge, Whalid and Pepe as they fold napkins, cut lemons, carry plates and ice and talk about their dreams, their families and their money troubles. As their lives close in around them, they must make decisions about whether they are going to fight injustice together or put up with the indignities of their lives because it’s better than the alternative.

My Mañana Comes is a timely, well-structured play that opens up the “backstage” world of high end restaurants with compelling characters and snappy colloquial language. Peter, an African-American father, has been working at the restaurant the longest and he and Jorge, an illegal immigrant from Mexico, show the ropes to Whalid, a Brooklynite and Pepe, a new illegal immigrant from Mexico, as they start working at the restaurant. Whalid wears his Americanness proudly, jibing the Mexicans for saving all their money and not going out and having fun. Sometimes the characters feel more like types than like characters and Irwin seems to try to combat that by giving each man a soliloquy aimed at a family member. These speeches, however, seem more like easy storytelling than like necessary dramatic writing.

Chay Yew has directed the piece to feel exceptionally realistic, from the bread baskets to the lemons, we see the work that these men do while they’re talking about their lives. We see delicious looking dishes pass across the stage before reaching their tables, and, critically near the end, we hear the entrance of a character who will determine their fates, and we see the reaction to his arrival that each of the men have. The cast is uniformly strong, with especially poignant performances from Jason Bowen (Peter) and Jose Joaquin Perez (Jorge), whose parts are more fleshed out and serious.

The climax of the play is both surprising and inevitable. The themes that have been explored throughout the play immediately come to a head when the divide between the Americans and the Mexicans cracks open and each man has to make a decision to ensure his own survival. And we see just how tenuous the relationships that we’ve watched have actually been and we wonder just how much anyone can trust their colleagues when times get hard. It’s a cynical lesson, but it’s probably the right one.