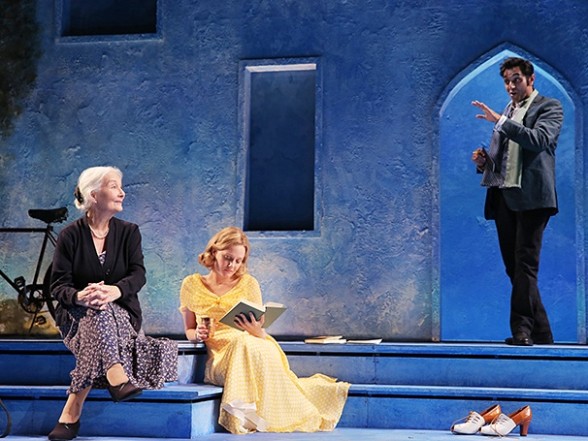 Tom Stoppard’s lush play Indian Ink makes its New York debut at the Roundabout Theatre Company almost 20 years after it was first performed in London’s West End. Considered “minor Stoppard” by many, this play explores some of the same tropes and questions and theatrical devices as his masterwork Arcadia, but in a different context.

Indian Ink follows two connected story lines simultaneously. The first follows Flora Crewe, an English poet who has traveled to India “for her health” and lands in Jummapur in 1930, where she is welcomed graciously by the Theosophical Society and is asked to sit for a portrait by a local painter, Nirad Das. The second follows the exploration of Flora’s life after her death in the 1980s, first by an American professor Eldon Pike, who comes to visit Flora’s sister Eleanor in hopes of publishing her letters, and then by Nirad Das’ son, Anish, who has seen the portrait by his father on the cover of Professor Pike’s book and comes to pay his respects to Eleanor. The stories are masterfully woven together in such a way that it doesn’t seem to matter that by the end there are three separate story lines operating completely independently.

Stoppard’s play is about love and adventure and Empire and the nature of understanding the past. Flora’s letters home paint a picture of a point in Indian history just as Gandhi is starting to launch his civil disobedience that led to Indian independence 17 years later. But they also paint a picture of the calm between the world wars. His treatment of the 80s as a decade is less complete or distinct, but the history of that period was more immediate when the play was written. But the characters in both time periods, for the most part, defy caricature, even if they are often spewing insanely witty dialogue. The mystery in Indian Ink swirls around the painting that Nirad did of Flora, but also around a second secret portrait of her. Consumption of the play, however, seems to be more about the experience and the consummation of certain relationships and perceived truths than the plot.

Romola Garai is luminous and charming as Flora Crewe, Firdous Bamji portrays the anxious and sensual Nirad with care and nuance. Nick Choksi provides great comic relief as Dilip, Professor Pike’s Indian tour guide. The design elements are stunning and the direction by Carey Perloff is clear and unfussy. It’s a great production of a thoughtful, gorgeous, witty play that makes it hard to believe that it hasn’t been performed in New York before. 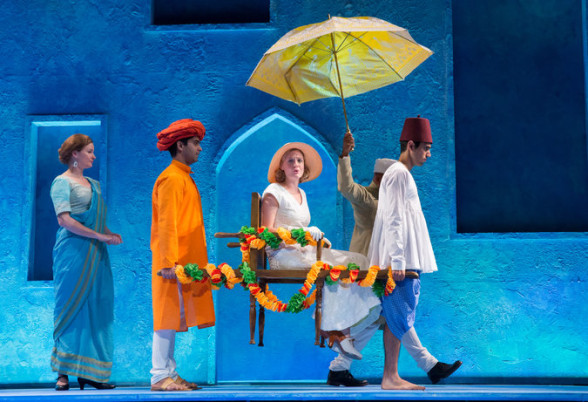