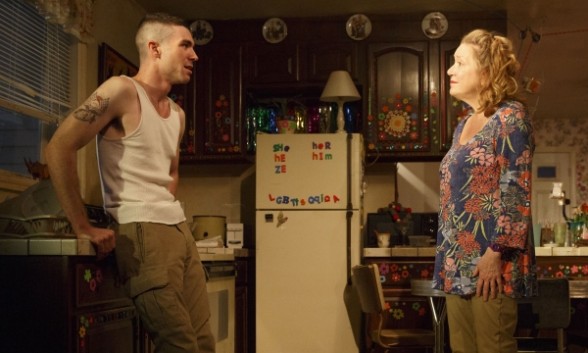 If you’ve seen a Taylor Mac show before, you won’t be surprised by the amount of sparkle on the set of Mac’s new play Hir (pronounced “here,” as it is explained in the play). You may, however, be surprised by the fact that there’s a sink that works. Mac’s play about a man returning to his family’s home after working the mortuary affairs unit in the military takes a classic American theatrical form and subverts it while also staying true to the form. Isaac (called “I” in the play) returns home to see that his house is a mess. His father has suffered a stroke that has left him at the mercy of his mother Paige and Paige is fed up with years of living within the confines of the white male hegemony. She forces her husband to wear dresses and sleep in a cardboard box in the living room. She sprays him with water like a cat when he does something that she doesn’t like. She is reveling in her new-found power. I’s response is to vomit into the sink. A lot.

And then Paige reveals that I’s teenage sister Max is transitioning into a man. Paige explains all of the terminology that she’s learned from Max (the audience is helped out by fridge magnets), but I continues to vomit in the sink. It’s Saturday and Max is being homeschooled, so they’re taking a field trip to a museum and they want I to join them. Despite much persuading, he decides to stay home and at the end of the first act, we have a sense that the house is going to look very different when the curtain rises for the second act. If Arnold can’t be the man of the house, I will take over.

Hir is a funny, sharp, cutting play about family, gender, power and America. It is a play about the death of the patriarchy and the benefits and costs. It is about the mythology of the American Dream and the politics of today.

The entire cast drives the play forward with breakneck performances. Kristine Nielsen, playing Paige, is astonishingly manic and charming, drawing the audience in while also reviling them with her mistreatment of her husband. Tom Phelan is equal parts goofy and militant as Max, who tests out his masculinity in the presence of I to the disappointment of his mother. Cameron Scoggins and Daniel Oreskes fill out the cast with humor and simmering rage as Isaac and Arnold. From the opening moment, Hir lives in a liminal space just above realism and just below farce (Mac refers to it as absurd realism) and so the tone of the play seems clear from the beginning — we know that, despite the kitchen sink, this is not a kitchen sink drama. 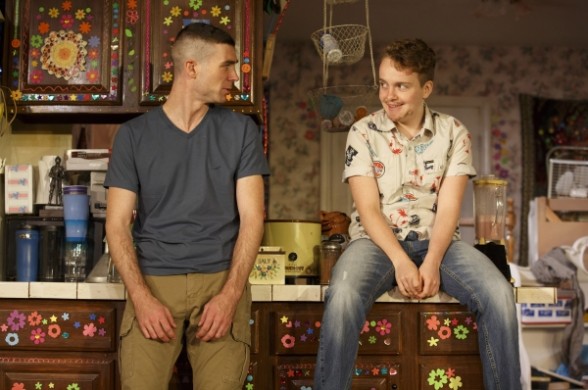 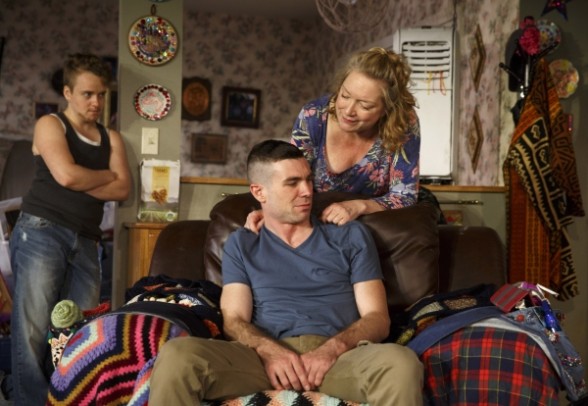