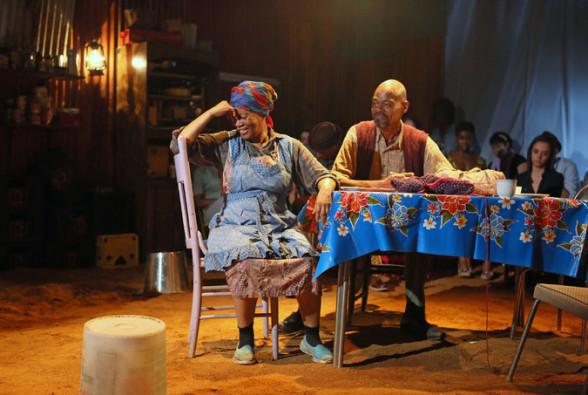 Soho Rep has transformed their Tribeca space into a kitchen in a South African township. They’ve covered the floor with sand, they’ve put up colorful corrugated steel and they’re selling South African beer in their concession stand. The audience sits on stools and plastic chairs, surrounded by members of a powerful choir. The aesthetics of their production of Debbie Tucker Green’s Generations overwhelm the piece itself and in some ways obfuscate the actual purpose of the play.

Generations tells a family story in an unconventional, but slightly gimmicky way. We meet a family whose daughter is in love with a young man, but he asks her if she can cook and it spurs a long conversation about whether or not she can cook. And whether or not the other women in her family could cook. The scenes are broken up by bursts of choral music and we soon learn that characters depart the scenes and their lines are also taken out of the scene. The scenes lose and gain meaning as a result of this writing trick, until we are left with just two characters onstage, mourning the loss of their other family members.

Written as a response to the AIDS crisis in South Africa, Generations premiered at the Young Vic in London in 2007 and is making its American premiere at Soho Rep in a co-production with The Play Company. The production, directed by Leah C. Gardiner, has weight and extreme emotion, but it occasionally feels manipulative of its audience as the music swirls around us and the dialogue gets more and more sparse. The actors seem unsure of themselves at times, or unsure of their dialects and unsure of how to play naturalistically a script that is so formally challenging. In this sense, the play feels like it’s high on concept, but the concept doesn’t fit with the words being spoken by the characters.

Originally, the production promised a South African meal for the audience after the performance, but during rehearsals and tech they abandoned this plan. This also seems to reflect the complicated understanding of both the play itself and the evening of theater that the production team hoped to present. Are we watching a concert, a play, an immersive experience or something entirely different? It seems that this question is explored but not answered by the production, and the experience of the show is certainly one that will force audience members to ask questions of themselves and of the production, but it’s not clear that those are the questions green hoped audiences would ask. 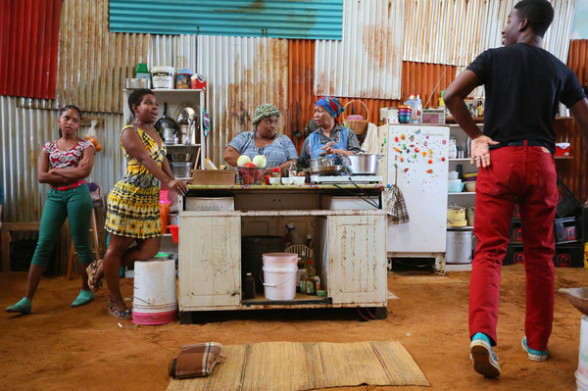