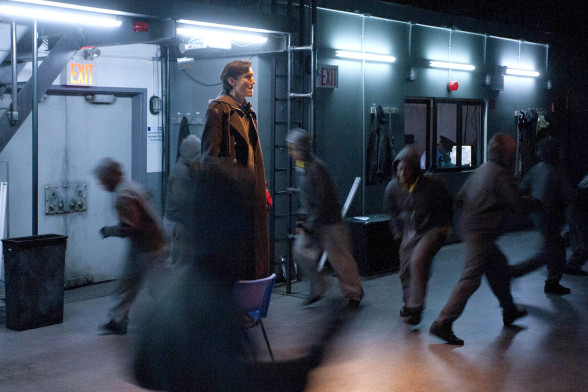 St. Ann’s Warehouse has transformed itself into a women’s prison for its newest production of Julius Caesar. Audiences are shuttled into the space in groups, shouted at by prison guards and told very firmly to shut off their phones and that they are not permitted to bring in contraband or use the bathroom during the performance. Phyllida Lloyd’s all-female production of Julius Caesar that premiered at London’s Donmar Warehouse in December 2012 has stormed into New York with a vengeance. And it’s a delightful and harrowing ride. 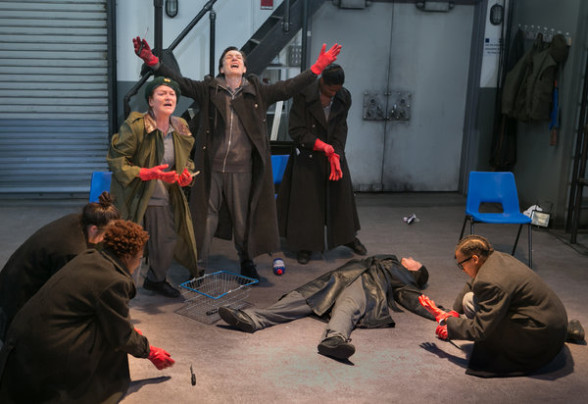 Contemporary adaptations of Shakespeare must walk a fine line of being appropriate to the text while also being recognizable as contemporary. Lloyd’s production sets the play in a women’s prison, but cleverly reminds us that the prisoners are never free to do exactly what they please. The wardens are always in control, whether they’re focusing lights on the prisoners or taking them away from their roles so they can take their medication. This conceit allows the audience to be aware of the context of the performance, and dive into the world of the play without being distracted wondering why these women are referring to one another as men. 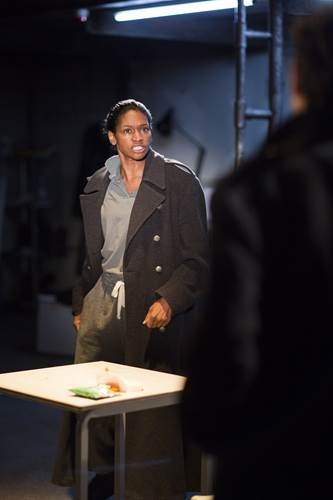 The cast, comprised of fourteen actresses in gray sweatpants and polo shirts who occasionally accessorize with long leather trenches, military jackets and balaclavas, is extraordinary. Harriet Walter’s Brutus is strong, yet conflicted. Frances Barber’s Caesar is terrifyingly manipulative and charming. One of the peculiarities of Julius Caesar is how often the audience is invited to change allegiance (much like the Roman people at the time), so there are shifts in focus between the men hoping to gain power. The moment Mark Antony, played with sexual intensity by Cush Jumbo, begins his famed “Friends, Romans, countrymen” speech, is a fascinating moment that takes the character from being in fear of being shot to being entrancing to the rest of the prisoners (and the audience). Carrie Rock’s Soothsayer provides creepy comic relief throughout the play.

The use of movement and multi-media is particularly affecting. A small rock band accompanies the fighting scenes. Cameras are used to highlight certain moments and project them for the audience to get a closer look. Props and costumes have a makeshift feel, as if they were the only things available from the commissary. And the audience is included as members of the Forum before Caesar’s death in a smartly constructed way. New York seems to be lousy with Shakespearean adaptations this fall, but Lloyd’s Julius Caesar is smart, funny, poignant and necessary. 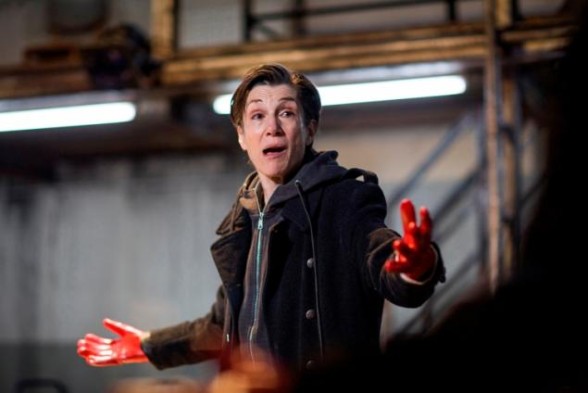