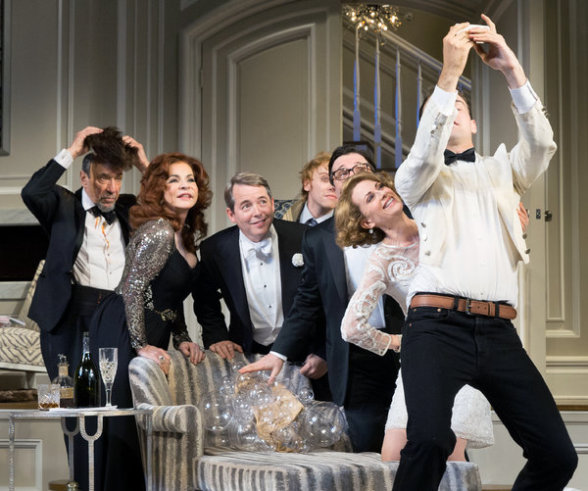 A group of show-biz types are gathered together in the well-appointed bedroom of a lavish Manhattan townhouse: an actress, a director, a producer, a playwright and his TV star friend. Downstairs, an opening night party following the premiere of a new Broadway play is in full swing; up here, however, no one is partying. In fact, they’re all a little nervous; the reviews are coming in, and they don’t know what to expect.

We know what they THINK: the TV star hates the play, the director, who can’t handle success, is afraid he’s got another hit on his hands, and the playwright…well, he’s hoping for a Tony winner, but he doesn’t want to get his hopes up TOO high.

That’s the first act set-up in Terrence McNally’s “It’s Only a Play”, which he wrote originally in 1978, and has updated for its current run (now at its new home, the Bernard B. Jacobs Theatre) by stuffing it so full of celebrity references (a new name is dropped, like clockwork, every couple of minutes), so full of smell-of-the-greasepaint inside jokes (wink-wink!) and so many gags regarding that mountain of coats on the bed that the whole thing looks ready to burst at the seams – jokes, coats and all – at any moment.

And, saddest of all, only some of it — mainly at the start of the Act II, when the reviews, which are uniformly bad, start coming in — is funny.

Martin Short (replacing Nathan Lane, who had the good sense to pack up and goeth to “The Iceman Cometh”) is fine as sitcom vet Jimmy Wicker, a one-time “serious” actor who could have been a star on the Great White Way but decided instead to head to Hollywood; he’s less manic than usual, but just as ingratiating, just as much of a pro with the laughs.  Unfortunately, Matthew Broderick as his playwright pal doesn’t quite measure up; he’s less nebbishy than he often is but just as needy (and who’s needier than a playwright with a brand-new show?), less dweebish than — unforgivably — just plain dull.  Broderick delivers most of his lines in a flat, toneless whine that left me waiting for his speeches, and he has a few of them, to end. (A word in his defense: I’ve heard him sing.  I’ve seen him dance.  He can’t do either exceptionally well, but he is, in the very best sense of the word. a trouper.  Perhaps if he’d joined another troupe, signed on for another play or musical altogether, he would have had a chance to show off his chops to greater, more satisfying, effect.  Ah, well — a fella can dream, can’t he?)

Isabel Keating, filling in for Stockard Channing as the foul-mouthed, coke-snorting diva Virginia Noyes, is quite funny, F. Murray Abraham as a critic with a yen to pen plays of his own has his moments, the delightful Katie Finneran as the novice producer who’s in way over her head is given a bit, but not a lot, with which to display her own considerable charms, and Micah Stock as the star-struck servant and Maulik Pancholy as the unstable young director (a bomb! a bomb! my kingdom for a bomb!) do their best.

Jack O’Brien’s staging is too often flat and uninventive, and the lackluster ending, which makes it look like McNally finally ran out of jokes or ideas or both, comes out of nowhere — but not before the action has petered out precisely when it should have been peaking.

Thank Dionysus it was only (yawn) two-and-a half hours. 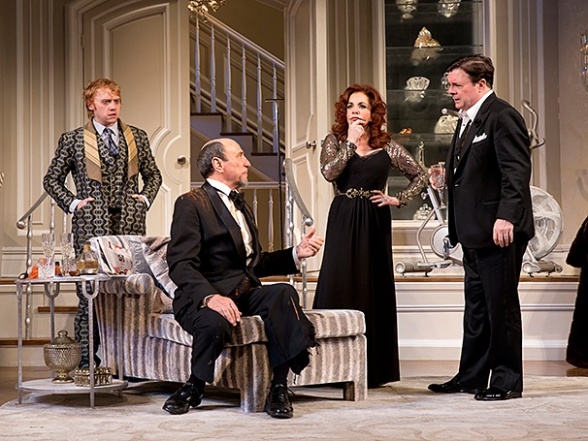 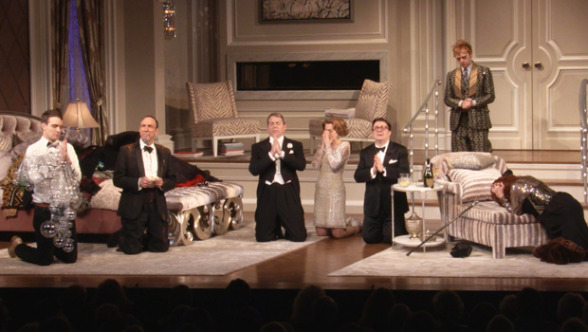