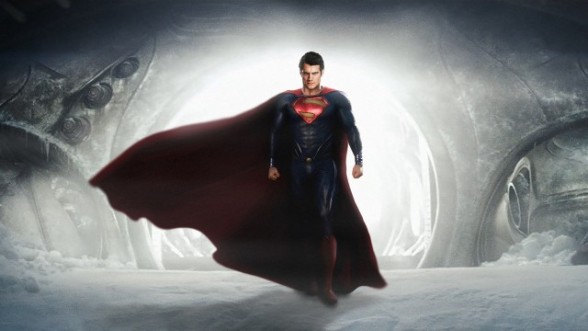 Ear-splitting sound effects, a chiseled but uncharismatic leading man, a host of talented actors flailing away in boring, underdeveloped roles, some wholly unnecessary tweaking of a comic book icon that hardly needed tweaking at all…these are just some of the things that make “Man of Steel”–actionmeister Zack Snyder’s Superman reboot–a little like a six-car pile-up on the LIE: you don’t want to keep looking at it–but you do.
.
For those who have been living under a colossal chunk of Kryptonite all these years, the story, at least at the beginning, is a familiar one: during the last chaotic days of the planet Krypton, which is coming apart at the seams, famed scientist Jor-El and his wife, Lara, bundle their newborn son into a spaceship and send it off to Earth.  The baby, of course, becomes young Clark Kent, the adopted son of Midwest farmers Jonathan and Martha Kent; knowing the child is special–and learning, soon enough, that he possesses powers no one else on Earth can claim–the Kents convince him to keep his true identity a secret.
.
Here’s where it gets a bit dodgy.  Instead of following Clark’s growth from boy to man in any kind of linear fashion, David S. Goyer’s script bounces back and forth.  We see a strapping Clark, perhaps twenty or so, saving the crew of a burning oil rig out in the middle of the ocean; then we see him, years earlier, being warned by his dad not to put his powers on full display until the time is right.  We see a teenaged Clark rescuing his friends after a school bus accident, and then Pa Kent (again!) warning him of the problems he’ll face once the world learns of his alien roots.
.
In fact, thanks to all the amazing feats of heroism and father-son chats–not to mention all the blockbuster-sized battles with the maniacal General Zod (newly-escaped from the infamous Phantom Zone)–Clark doesn’t even have the time to don those iconic horn-rimmed glasses and join the staff of the Daily Planet until the movie’s final moments.
.
The cast does its best with some seriously one-dimensional roles.  Amy Adams’ Lois Lane, finding herself in one Perils of Pauline-type predicament after another, is tough and spunky and fearless to a fault, but little else; Michael Shannon’s Zod is so frothing-at-the-mouth fanatical that he quickly becomes tiresome; Kevin Costner’s Pa Kent is all craggy face and crinkly eyes and earnest, down-home wisdom; Diane Lane’s Ma Kent is all dewy-eyed dismay; Russell Crowe’s Jor-El, in full furrow-browed, worried-warrior mode, spends most of his time giving his son holographic pep talks or verbally lambasting his arch-enemy, Zod; and Laurence Fishburne’s Perry White is, for the most part, all lantern-jawed, steely-eyed business. Even our hero, played by British newcomer Henry Cavill, isn’t given much to work with: he’s handsome and haunted in some scenes, hot-tempered and hell-bent in others.
.
There’s no denying it–“Man of Steel” is blacker and bleaker, even grittier, than its predecessors  (Credit for that, naturally, goes to the Prince of Darkness himself, Dark Knight auteur–and “Man of Steel” producer–Christopher Nolan.) This Son of Krypton actually looks like he’s putting some EFFORT into righting wrongs, beating the bad guys, and saving the woman he loves.  He grits his teeth, grunts, grimaces, and roars–loudly. But with its amped-up sound track and endless FX, “Man of Steel” soon becomes just as much of an effort to watch.
.
Sometimes our pop culture icons are tweaked for the better.  Sometimes they’re tweaked for the worse. Despite its high-flying hero, this re-imagining of the Superman legend never quite gets off the ground. 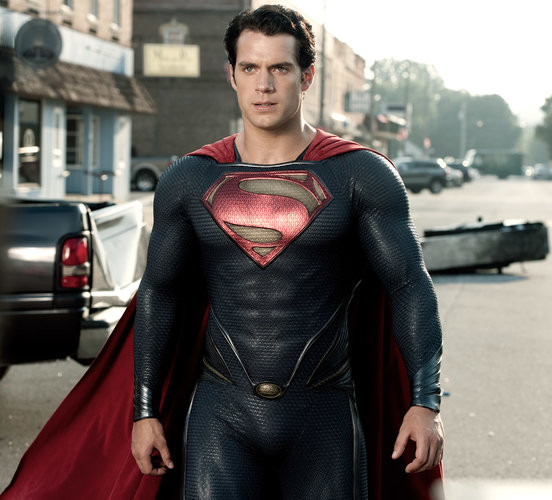