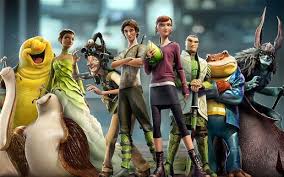 A big story writ small — inch-high forest creature small, to be exact — the entertaining but unexceptional “Epic” follows the adventures of spunky 17-year-old Mary Katherine, better known as M.K., as she finds herself reduced to woodland fairy size and embroiled in a war between the guardians of the forest, an army of handsome, square-jawed soldiers called the Leafmen, and their eternal enemy, the ugly and predatory Boggans.

The story: M.K. is wandering through the woods one day, searching for her dog, when the mortally wounded Queen of the Leafmen, Tara, comes tumbling from the sky. Tara hands M.K. the “royal pod”, and asks her to protect it.  Nothing less than the survival of the entire forest is at stake: the pod is meant to bestow queenly powers upon Her Highness’ successor, and if M.K. doesn’t get it into the right hands, fast — or, even worse, if the Boggans get their rotten little mitts on it — everything in the forest will die.  Will M.K. save the day? Will she learn to work with the Leafmen, especially the cute young flyboy, Nod? Or will she decide, selfishly, that saving this magical world she had known nothing about ISN’T worth it, and that her only goal should be finding her way back home? 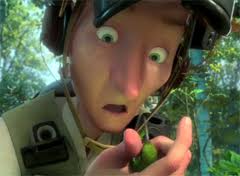 Because this is a children’s movie — it’s not just eco-friendly but also about as hard around the edges as taffy — the answer’s a no-brainer.  There are a few genuinely funny characters — including the slug and snail in charge of guarding the pods, and M.K.’s nerdy scientist Dad, whose longstanding belief in the existence of an “advanced society of tiny people” living in the forest has everyone, his daughter included, convinced he’s a crackpot — some nifty action sequences, and lovely, computer-generated artwork.

But it’s not nearly as funny as it should have been, or even as suspenseful.  (A couple more plot twists would have helped, too; aside from the “resurrection” of one of the characters toward the end of the film, you can see what’s coming from the proverbial mile away.)

It did get one thing right, though — thanks to M.K. and her diminutive pals, I’ll never view nature, or even take an innocent stroll through the park, in quite the same way again.