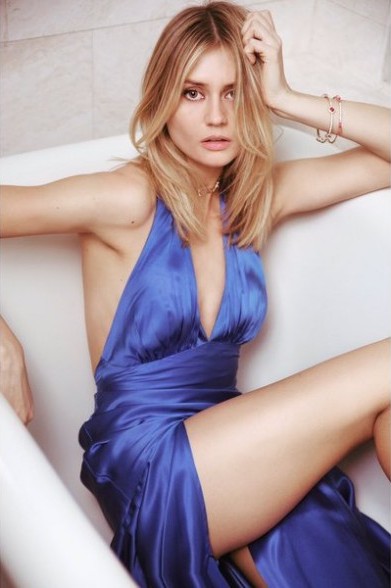 In this story you will see the ultimate goal of a stunning Belarusian girl who left home with no money to live in New York. She’s a cosmopolitan who restarted life away from her family and friends from scratch, starved during the tough times, and eventually succeeded as an actress and model

Lucas Eller: How was the experience of joining SAG for you?

Alessia Sushko: I became SAG-eligible after booking a few independent films through Actors Access. Then I had to become a SAG member so that I could be in the show Sex & Drugs & Alcohol. When I started studying acting, I was an account executive for an advertising agency called Titan. Six months later I realized acting was going to be my career, and it was becoming impossible to combine my job with the increasing demand of the acting classes. So I quit that job and decided to model to support myself as an actress, because modeling gave me a much more flexible schedule.

L. E.: You told me you lost a lot of weight so that you could become a model. How was it?

A. S.: Yes, I lost a lot. My weight is very unstable, because I’m an emotional eater. Depending on my emotional state, I gain and lose weight accordingly.

L.E.: I know so many actors who model in the beginning of their career. Is it really the way to go when one loves acting and wants to pursue it as a career?

A. S.: True. But, to be honest with you, I never considered myself as a model, to me it was just the sort of thing that I figured I could do, and it worked with my schedule. When I was younger, it was never in my mind: “Oh, my! I want to become a model so bad!” In fact, I was always a nerd, brunette with short hair, and 25 pounds more than I am now.

L.E.: Glad to hear you found something good to do while you studied acting. So, what happened after you joined SAG?

A. S.: It’s a big change in an actor’s life. I started auditioning for much bigger projects, it brought responsibility, excitement and stress into my life. I had to learn how to audition with an attitude of sharing my work and creativity rather than pleasing casting directors. Now I embrace every opportunity of sharing my work, and it feels like therapy to me.

L.E.: We at Viva! Lifestyles are happy for you, it’s always nice to be able to figure what you want to do especially at a young age like yourself. Being happy in New York City is an important task. But it wasn’t always easy for you. Tell us how was your life before you moved to the United States.

A.S.: In my third year of university, I knew I wanted to come to New York, mainly because I watched way too many Woody Allen’s films. But my mom’s salary in Belarus was U$100 a month. So how do you buy tickets to come to New York and have some money to live here? She had been saving some money for several months, and gave me an amount which was a lot of money for her, so that I could have the chance to come here. And prior to coming I lied to her about how I would live here: I said I had gotten a job to work here, and that I had a place to stay, and that a friend was going to help me out. I had to lie so she would allow me and help me come.

L.E.: You had to make up some story without her knowing?

A.S.: Yes, she had no idea what I would go through. She gave me $350, which was all of her saving, so that I could get by in New York before I got a job. But there was still one little problem: I spoke very little English, because I had taken only a one-month intensive course right before arriving in New York. In high school, I took German instead of English because of a boy I had a crush on who took German.

L.E.: You made that choice in high school because of a boy, whom eventually you gave up on?

L.E.: How were your first few weeks in New York?

A.S.: Right. So, my English was very basic, I could barely say “Hi, I’m from Belarus and I need a job.” That was all I could say. A girl I met at the American embassy spoke better English than me,so that was helpful. When we arrived in JFK, we took a bus to Penn Station carrying our huge luggage, and from there we took the subway to Columbia University because we heard that they would give hostel to students. And this was the answer we heard from a man who worked there at that time: “I’m so sorry, ladies, but you are not students of Columbia so we can’t give you hostel here.” Freaking out, we asked him: “Where are we gonna stay, then?” and the man answer was “I don’t know, I can’t help you.”

L.E.: And both of you had very little money on yourselves?

A.S.: My friend had $450, and I had $350, and we had nowhere to go on our first night in New York. But that man felt so bad for us that he helped us find a cheap hotel in Queens, and we took a cab headed to this hotel with a small room and shared one bed.

L.E.: And how did you survive the next morning with so little money?

A.S.: On our second day, we left our luggage at the reception so that we could walk freely in New York, and went back to Columbia University and sneaked into a computer room for free Internet. So we went on Craig’s List looking for a place to stay, and realized how screwed we were, our money wasn’t enough for anything at all! We didn’t even have money to rent a $500 room because we didn’t have enough for the security deposit, we would need at least $1000 for the first month to cover security deposit plus we needed some money to live on. How could two people survive on $600 in New York City?

L.E.: It must have felt a little desperate, right?

A. S.: It was little crazy. Well, I had just been very excited to come to New York, I though we would be able to stay at the university hostel, and my plan was to be a “flower girl”, that I would sell flowers to make money since I spoke no English. Crazy idea, but it thought it was a good idea.

A.S.: It’s very cute when you are young, but it’s also very unpractical.

L.E.: But it worked somehow, you’re here fulfilling your dreams.

A.S.: I know, it did somehow. But it wasn’t easy:  My friend got so angry with me, because I convinced her to come with me. Before we flew to America, I got a job offer as a housekeeper in Washington D.C. and she got a job offer to work at as a housekeeper in Virginia, and when we got our visas, I said to her: “Are you crazy? We’re not going anywhere else, we’re going to New York.”

L.E.: Wise choice! Even though it wasn’t so easy.

A.S.: Yeah. I said to her we’d be just fine, and she listened to me and we diverged from the original plans.

L.E.: Are you guys still friends?

L.E.: So thanks to your decision both of you chose the best city in the world for adventurous, smart, young people.

L.E.: So then what happened on day two?

A.S.: We started looking online for ads for jobs for cheap places to rent, then she begin to cry, having a terrible breakdown while I told her “Calm down, we’re gonna figure something out.” And there was this Muslim man selling fruits at a fruit stand by Columbia University and he asked us what was going on, why my friend was so upset. After explaining to him what we were going through, that we were considering sleeping at Penn Station or Central Park that night.

L.E.: So what did the stranger do to help you both out?

A.S.: He took us to his home in Harlem, where he lived with his wife and three beautiful children, and rented us the room at $300 for 10 days.

A.S.: It was an amazing deal. And we didn’t have any other option so we had to accept it. The deal was that they wouldn’t give us keys to their apartment, we had to sleep on their children’s room in the two-level bunk bed. and they would keep our documents during the days we lived with them, which we found kind of risky, but at the end it worked out fine. Every morning we had to leave their apartment at 6 am, when they left for school and work, and we had to be back between 8 pm and 9 pm. On both sides, we trusted each other. And that was my first experience living in New York, at 125th Street and First Avenue.

L.E.: Did things get a bit easier after the scariest moments? How did you get work?

A.S.: My girlfriend and I kept looking for jobs, but we eventually were running out of money, subway fees were too expensive for us at the time, and we were nearly starving feeding on oatmeal. When the generous family realized our situation, they would leave food for us in their fridge so we could feed. And also it wasn’t easy for us to write a resume, with little English, what were we going to say? “We’re people from Belarus who are starving with very little money and speak no English. But we need a job.” The family with whom we stayed helped us write an attractive resume, and also another stranger we met on the streets told us to go to Fulton Street and look for some small businesses that might hire us to sell their merchandise.

L.E.: I guess your luck was beginning to change now.

A.S.: Well, if you call this luck: on the tenth day we had found no job yet and had only 10 dollars left, so my girlfriend, out of stress, decided to buy a pack of cigarettes with it. And now we had no money to go back to Harlem, so I lost it and started yelling at her, until a Jewish man at a barber shop came over to ask us what was going on. Because he spoke Russian we refused to speak with him at first, thinking that he would offer us jobs as dancers or strippers. But he convinced us that he knew someone who needed salespeople for his jewelry shop at Seaport. He offered us $40 a day if we could sell his jewelry, and we went crazy about it, dancing for tourists and showing them what we had to offer.

A.S.: Amazing. We went to celebrate at McDonald’s.

Lucas Eller: And from then on, how did you figure out a way to make more money than just 40 dollars a day?

Alessia Sushko: I found out that the best way would be to get a job at a restaurant, but then again I had another problem to face: lack of experience. So the jewelry man helped me get a job as a bartender on the New York Ferry.

(This is part ONE of three.)