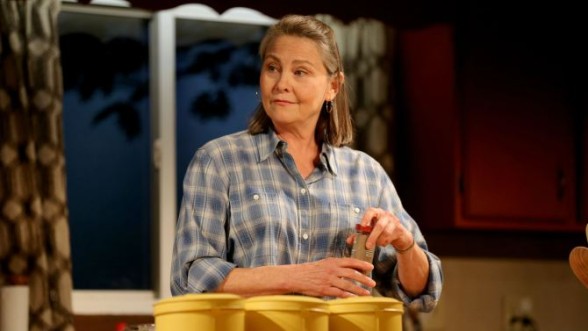 Cherry Jones tries her best to breathe life into Sarah Treem’s latest play, an only intermittently touching drama about the early days of the women’s movement, set in 1972.

Occasionally, she even succeeds.

Jones plays Agnes, a middle-aged woman who runs a bed-and-breakfast on an island off the coast of Seattle. But it’s not just a b & b: it doubles as a sanctuary for battered women.  A few pass through every year; they stay awhile, and then–having reclaimed their lives–strike out on their own, or, in some cases, return home.  It’s a hard job, nurturing these runaways, and a heartbreaking one, too–but Agnes, who expects little in the way of compensation for her efforts, considers herself more than up to the task.

Until, that is, the appearance of Mary Anne, who arrives one day with a black eye and a bruised jaw.  As Mary Anne’s injuries heal, she bonds with Agnes’ brainy daughter Penny, and hooks up with the sad and lonely boarder, Paul, who is on the run from a disastrous marriage of his own.  Secrets are laid bare, true natures are revealed, and by play’s end no one at that quaint little inn will ever be the same–including Agnes.

Jones, ever the pro, fully inhabits every scene she’s in.  Whether engaging in a heart-to-heart with her sixteen-year-old daughter, showing tough love to Mary Anne, or protecting her turf from an outside world that threatens to destroy her, she is never anything less than believable.  Morgan Saylor is fine as Penny; Zoe Kazan brings just the right amount of vulnerability and hangdog defeatism to the role of Mary Anne; Cherise Boothe does what she can as Hannah, the radical black feminist with the Angela Davis ‘fro who stops by and stays on to do repairs; and Patch Darragh almost (but not quite) makes us root for the shy and soft-spoken Paul.

If any of the actors–Jones included–falls short now and then of delivering a truly stellar performance, the fault lies not with them, but with Treem’s preachy, heavy-handed script.  The characters are woefully one-dimensional (here’s the mother hen, here’s her rebellious daughter, here’s the confused and spineless victim), and–once it’s introduced, which is very early on–the subject of the inferiority of men and the superiority of women, being nearly all they ever talk about, hangs over everything like a cloud.

Pam MacKinnon’s deliberately-paced direction slows the action down to a crawl, and, except for a couple of rousing moments toward the end, the entire piece seems oddly dispassionate, even cold.

The set by Scott Pask–with its small but functional kitchen and well-appointed dining space–is nicely detailed and, again, Jones herself is, as always, a joy to watch.

Too bad the same can’t be said of the play.