Has it really been twelve months since the last time Oscar came a-callin’? Yes, it has, and not very long from now — on Sunday, February 24th, to be exact — another gaggle of gleaming gold statues will be awarded to actors and writers, editors and designers — you name it — both deserving and (in the eyes of some, at least) undeserving.
.
So, in keeping with tradition, here is what I think of this year’s crop of Best Picture nominees, beginnning, as always, with my favorite, which is …
. 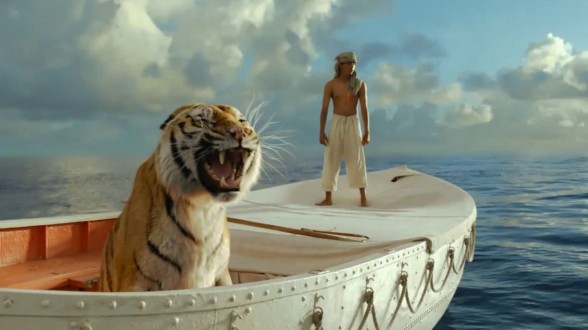 1) “LIFE OF PI”
“Life of Pi” is about a young Indian boy who finds himself lost at sea with only a snarling Bengal tiger for company. The ship the boy had been on has gone down; he and the tiger, who had been travelling with the boy and his family, along with other animals from his parents’ zoo, are the only survivors. Sound bizarre? It is; but this adaptation of Yann Martel’s celebrated novel is also visually splendid — some of the scenes, whether of storm-tossed seas or the life that thrives below the ocean’s surface, are simply breathtaking. Most beautiful of all, of course, is the tiger himself, an enormous creature who prowls and growls and, ultimately, learns to respect young Pi Patel (newcomer Suraj Sharma, in his acting debut) almost as much as the boy respects him. A virtual tour-de-force — whole stretches of the movie go by with hardly any dialogue at all — “Life of Pi” is one of the finest cinematic achievements of the year, and my choice for Best Picture.
. 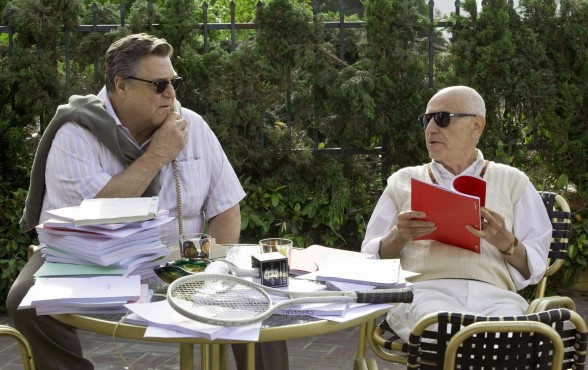 2) “ARGO”
Ben Affleck stars as CIA agent Tony Mendez (he also directed), in this rousng and suspenseful docudrama set during the Iranian hostage crisis in the late 70s-early 80s, when fifty-two American embassy workers in Tehran were held captive by Iranian militants for a mind numbing 444 days. It’s not THOSE Americans that the film focuses on, however; it’s the six Americans holed up at the Canadian ambassador’s residence, where they wait nervously for someone — anyone — to help them get out of Dodge.
.
Enter Mendez, whose specialty is “ex-filtrating” innocent Americans trapped in hostile countries. While the lives of the hostages at the American embassy hang in the balance, Mendez concocts a far-fetched plan to help the smaller group, involving a fake movie shoot, bogus passports, fabricated bios — the works. Will the plan succeed? Will they make it out of Tehran before the authorities realize they’ve been duped?
.
Affleck is fine as Mendez, as square-jawed and single-minded as we want our heroes to be, and John Goodman and Alan Arkin provide much-needed levity as a pair of aging and acerbic Hollywood types who agree to take part in the scam.
.
It’s Affleck’s movie, though, and he’s crafted a mighty good one: a taut little thriller that wholly deserves all the honors it’s received.
. 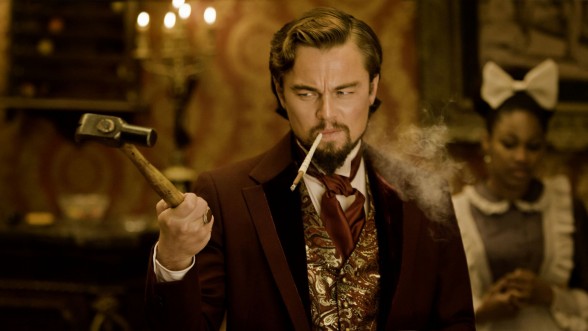 3) “DJANGO UNCHAINED”
Part road movie, part comedy, part no-holds-barred depiction of the horrors of slavery, Quentin Tarantino’s profoundly disturbing yet often quite funny “Django Unchained” is even more audacious than his last Oscar contender, 2009’s “Inglourious Basterds”.
.
Jamie Foxx stars as Django, a young slave being transported across Texas in shackles and chains when, at the start of the film, he is purchased by German dentist-turned-bounty-hunter King Schultz, played with subtle comedic flair by the Austrian actor (and “Basterds” star) Chistoph Waltz. They join forces; if Django will help Schultz track down the sadistic overseers he’s been hunting, he will return the favor and help Django find his wife. Along the way — and after an extraordinary amount of bloodletting, with still more to come — they meet a whole host of badasses, including Leonardo DiCaprio as a cruel plantation owner and Samuel L. Jackson (in full anti-Shaft mode) as his aging but equally cruel house slave.
.
“Django” isn’t a great movie, but it’s certainly entertaining. Leave it to Tarantino, who wrote and directed, to mine a subject as horrifying as slavery for all the laughs he can find … and then some.
. 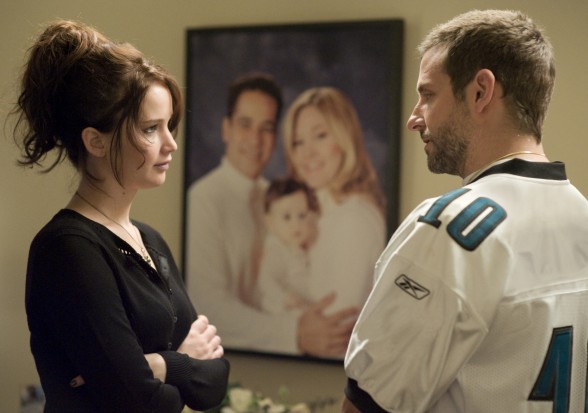 4) “SILVER LININGS PLAYBOOK”
Two damaged souls meet and fall in love in the romantic dramedy “Silver Linings Playbook”. Bradley Cooper shines as Patrick, a thirty-something ex-school- teacher recently released from the mental institution he was sent to after laying a serious beatdown on his ex-wife’s lover; Jennifer Lawrence radiates fierceness, intelligence and a vulnerability all her own as Tiffany, a beautiful young widow whom Patrick meets over dinner at his friend’s house.
.
Patrick may be bipolar and filled with rage, but there’s a decency about him, too, and half the time you just want to hug him; Tiffany may have become a bit of a nymph following the tragic death of her husband, but she clearly aches for some understanding, too. Robert DeNiro as Pat’s frustrated bookie Dad, Australian actress Jacki Weaver as his incredibly patient Mom, and Chris Tucker as (what else?) Pat’s motor-mouthed best friend, are also very good. Written and directed by David O. Russell — and with an unexpected improvisational vibe that only adds to its appeal — “Silver Linings Playbook” is a terrific film.
.
5) “ZERO DARK THIRTY”
“Zero Dark Thirty” is about the search for Bin Laden, and the woman — an intelligence specialist in charge of the manhunt — who becomes obsessed with finding him. Jessica Chastain plays the woman, Maya, a little like a flower: all fragile on the outside, but a venus flytrap underneath.  Of course, she has to be that way: not only has Bin Laden been eluding capture for years, not only is Maya among the youngest and most inexperienced field ops in her entire organization, but she is also a woman (albeit a tough one) in what is very much an alpha male world.
.
Chastain is excellent, if, on occasion, a little too reserved. What hurts the film the most, however — what sets it apart from, let’s say, its fellow docudrama, the superior and even more audience-friendly “Argo” — is that, aside from Maya herself, and the elite squad of Navy Seals who swoop in at the end to carry out their mission to its bloody but triumphant conclusion, there’s no one, really, to root for. You can’t root for the sadistic interrogators who spend much of the first half of the movie torturing suspected terrorists to within an inch of their lives; you KNOW you’re not supposed to root for the terrorists themselves (although you kind of want to); and the suits-and-ties pulling the strings are, well, just that … suits-and-ties. (Some of those early interrogation scenes are awfully hard to watch, as well. Maya stands by silently observing, because it’s her job. We have to watch because director Kathryn Bigelow and screenwriter Mark Boal have decided to engage in a little cringe-inducing overkill. There’s a difference.)
.
“Zero Dark Thirty” is a good movie — even a very good one — but no masterpiece. Frankly, I rooted harder for Jeremy Renner and his bomb squad buddies in Bigelow’s “The Hurt Locker”.
.
6) “LES MISERABLES”
Jean Valjean is on the run yet again in this big screen adaptation of the long-running, hugely successful musical. It isn’t easy, I’ll admit, listening to actors SING their dialogue for nearly three full hours — that’s an approach best suited to the stage, where it should probably, and forever, remain — but the voices are, with few exceptions, top-notch, the score is lovely, the big, audience-pleasing arias (“I Dreamed a Dream”, “On My Own”, “Bring Him Home”) are still there, and Hugh Jackman as Valjean, the decent, merciful man treated so mercilessly for much of his life, is worth every glowing notice he’s received. (Ditto for Anne Hathaway as the frail and lonely prostitute, Fantine.) Russell Crowe (whose singing isn’t nearly as cringeworthy as some have complained) tends to strike the same dramatic note over and over as the singularly obsessed Javert, and the conniving innkeepers, played by Sacha Baron Cohen and Helena Bonham Carter, are darker than I recall — more corrupt than comical — but no matter. There are really two movies here: the first half, featuring the bleak, sweaty lives of Paris’ poor, and the second, with its ragtag bunch of bouyantly optimistic,
fresh-faced student revolutionaries. You will no doubt enjoy them both.
.
7) “LINCOLN”
In the beginning of “Lincoln”, there’s a Civil War scene of such unbridled ferocity that you hope the rest of the film wil be as intense. Sadly, it isn’t. “Lincoln”, it turns out, takes place during the Civil War, but isn’t really about the Civil War. Instead, it’s about all the bickering and backstabbing in the halls of Congress as our nation’s sixteenth president tries desperately — calling in a chit here, applying gentle pressure there — to get the 13th Amendment, which will prohibit slavery, passed.
.
But the script (by playwright Tony Kushner) is as dry as a piece of parchment, the pacing (thanks to Steven Spielberg’s direction) is often glacial (the Civil War itself didn’t last as long, did it?), and, let’s face it, when a film doesn’t fully engage the emotions until the very end — here, when Lincoln’s young son learns of his father’s death and immediately collapses in tears — there’s something awry in Appomattox, for sure.
.
(As of this writing, I have not seen “Amour” and “Beasts of the Southern Wild”. Reviews of those films — and how I would rank them – will appear shortly.)
.
Next up: My take on some of the other catagories, including Best Actor and Best Actress. Go grab some popcorn, and I’ll see you then!
.
THE 2013 OSCARS REVIEW by Stuart R. Brynien