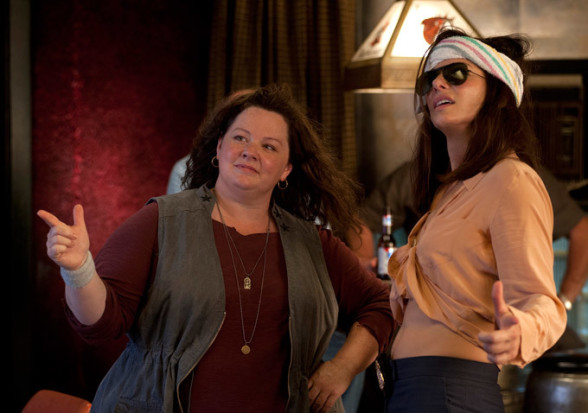 “The Heat” is an odd couple cop comedy with a twist: the cops are women, not men, they are anything but damsels in distress waiting for their knights in shining armor to come rescue them, and–true to their profession–they give as good as they get.

Well, one of them does anyway, and that would be Boston Detective Shannon Mullins, the squat and foul-mouthed half of the team, played by TV and film comedienne Melissa McCarthy.  Mullins is such a rebel that she never thinks twice about giving lip to anybody, superior officers included; she’s so single-minded in her resolve to catch the bad guys that she barely remembers to change her clothes every day–her idea of a new top is the same old grungy one, worn inside-out so that she could at least PRETEND it’s clean.

Her polar opposite is FBI Special Agent Sarah Ashburn, a tall, slim, jacket-and-slacks kind of gal who wears her long straight hair parted neatly in the middle, and a look of utter disapproval on her unsmiling face.

When Ashburn is sent to Boston to help the locals solve a big drug case, Mullins–the detective who’s been doing all the dirty work–hasn’t, of course, much need for her.  What follows is one long series of verbal smackdowns as the local and the fed somehow learn to work together.  It’s not easy: Ashburn believes that playing the “good cop”, trying to coax info out of a perp or witness while still maintaining one’s composure, is the way to go; Mullins sees nothing wrong with playing the occasional game of Russian Roulette, her gun pointed squarely at a male perp’s crotch.

There are lots of scenes like that–McCarthy’s character behaving intuitively but crudely, while her Yale-educated partner looks on in horror and, finally, exasperation–and therein lies the movie’s central problem.  “The Heat” is very much a one-note affair; not only are McCarthy and Bullock hardly ever apart, but they almost never suggest anything about their paper-thin characters aside from a “mean streets” kind of toughness on the one hand, and a joyless, starchy stiffness on the other.

McCarthy is fine, although she has already mined this territory for laughs in vulgar comedies like Feig’s “Bridesmaids”; and Bullock, the consistently bewildered “straight man”, a fish-out-of-water from first scene to (nearly) last–makes the perfect foil.

But it’s McCarthy’s movie all the way.  Whether dropping yet another F-bomb in screenwriter Katie Dippold’s profanity-laced (and, according to reports, heavily improvised) script, or trying her best to maintain peace among the members of her hilariously dysfunctional blue-collar family, McCarthy commands the screen so completely that it’s hard to look away from her.

Should Feig and Dippold have given their leads, particularly McCarthy, a bit more nuance? Should they have thrown in a surprise or two so we didn’t always feel superior in our knowledge that we knew exactly where the relationship was heading?

Or maybe they should have defied convention and reversed the roles completely.  Hmmm.  McCarthy as Little Miss Prim-and- Proper and Bullock as the bulldog…now that would have been something to see.

As it is, “The Heat” is funny in an “oh no, she didn’t just do THAT!” kind of way…but not as funny, or surprising, as it could have been.