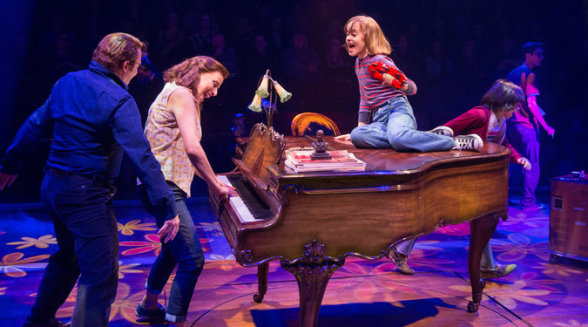 A young lesbian, just out of the closet, learns that her father has been carrying on gay affairs of his own in Fun Home, the funny, charming, and ultimately heartbreaking new musical–set, at least in part, at a family-owned funeral home (hence the title)–that is currently running at the Circle in the Square Theatre uptown.

Based on Alison Bechdel’s best-selling graphic memoir, Fun Home is her story: we see her as a forty-something professional cartoonist, recalling the events of her past; as a college-age teenager, shyly discovering her sexuality; and as a peppy little girl who loves her parents, likes to draw, and enjoys frolicking around with her younger brothers.  Sometimes the three Alisons appear on stage individually; quite often one of the younger Alisons stands front-and-center in a scene while grown-up Alison hovers nearby, watching; occasionally all three appear at once.

The whole lot of them have been nominated for Tonys, and, under the sensitive guidance of director Sam Gold, they’re all good, from Beth Malone as “older” Alison on down.  (Emily Skeggs as “middle” Alison, and the remarkable Sydney Lucas as “small” Alison, are particularly terrific.)  Also superb are the ever-reliable Michael Cerveris as the father (his long, tortured battle with his true inner self, which climaxes in an unforgettable scene in the second act, will leave you in tears), and Judy Kuhn as the loyal, loving, brokenhearted mom.

Some of the songs are show-stoppers, among them the kids’ jubilant, high-energy “Come to the Fun Home”, which they perform as a kind of advertisement for the family businss early in Act I…Skeggs’ very sweet, very clever ode to her new love, “Changing My Major”…Kuhn’s scorching solo number in Act II, “Days and Days”…and Cerveris’ gut-wrenching “Edges of the World”, near the end.
Kudos to composer Jeanine Tesori and librettist/lyricist Lisa Kron for one of the most moving scores of the season.

The sets and lights, by David Zinn and Ben Stanton, respectively, with all the furnishings rising up from beneath the stage, and a handful of special lighting effects–sometimes very dramatic ones–that match the mood and action perfectly, are also top-notch.

In fact, there’s nothing about Fun Home–one of the best, most emotionally satisfying shows of the season–that isn’t. 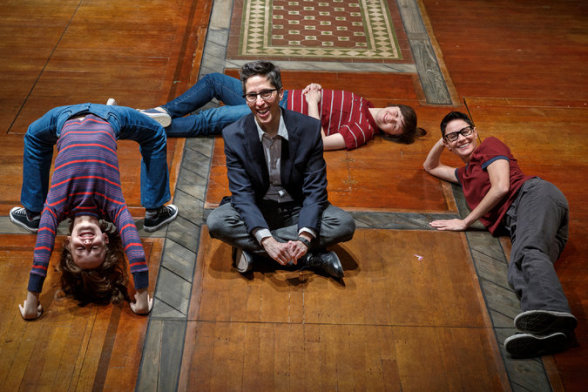 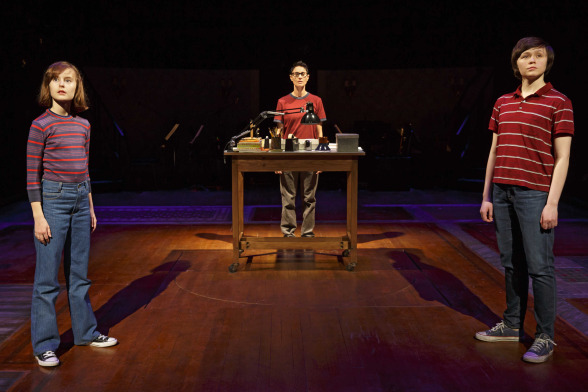