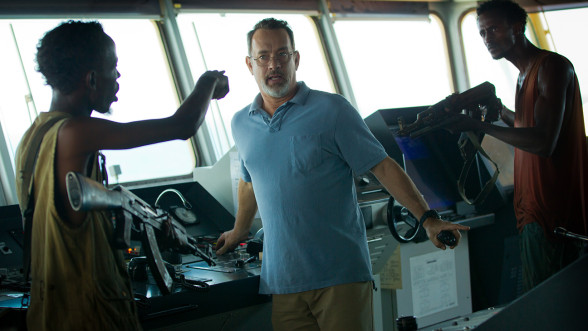 Tom Hanks stars in “Captain Phillips”, a fact-based thriller about the 2009 hijacking by Somalian pirates of an American freighter at sea.  Hanks turns in one of his finest performances: shaken but stalwart, broken but unbowed–truly a Captain Courageous.  From the moment he warns his crew about the dangers ahead (they’re entering pirate-infested waters, he cautions them, in a scene that is chillingly prescient), to the film’s heartbreaking, gut-wrenching finale, Hanks as Phillips–all steel-framed glasses and, for much of the action, even steelier resolve–is terrific.  Spectacular newcomer Barkhad Abdi as Hanks’ Somalian foil, the brooding but sharp-eyed pirate leader Muse–in what is, remarkably, his very first role–is mesmerizing; you can’t take your eyes off him because you’re never sure what he’s going to do next.  Moments of graphic violence are tempered by scenes of hold-your-breath suspense in which not a gun is fired, not a word is spoken.

“Captain Phillips”–directed by Paul Greengrass, from a script by Billy Ray, and based on Phillips’ own book–is one long head game, Phillips vs. Muse, in a war of wills, a battle for survival, and also straight-ahead, adrenaline-fueled, no-frills storytelling at its best.
FILM REVIEW by  Stuart R. Brynien