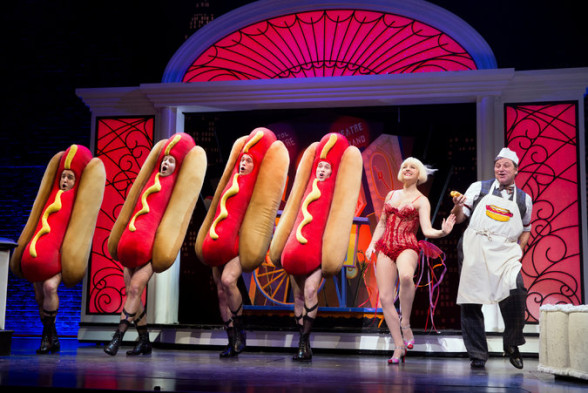 Zach Braff stars as David Shayne, a struggling young playwright who pens plays no one can understand, and would do anything–anything!–for a hit.  Enter mobster Nick Valenti, who generously offers to bankroll a big-time production of Shayne’s latest effort, with one catch: our hero must somehow find a part for Nick’s girlfriend, the supremely untalented Olive. Throw in Olive’s bodyguard, an imposing brute named Cheech who not only accompanies her to every rehearsal, but has his own ideas about how the play should proceed (he has more of what you might call writerly instincts than Shayne could ever hope to have), and things go haywire in a hurry.  Soon, his fiancee is leaving him, he’s being pawed and purred at by the show’s lascivious leading lady, he can’t even call the script his own anymore because Cheech has reworked the plot and rewritten most of the dialogue…and, in the meantime, the screechy-voiced Olive, in an ever-expanding role, is very adroitly turning the whole thing into a disaster.

Braff, with his perpetually-furrowed brow and lost puppy dog face, is fine; he is the Woody Allen-esque nebbish at the eye of the storm, and when I wasn’t thinking of Allen I was thinking of pinch-faced stand-up comic Gilbert Gottfried, or, at times, the young John Ritter, and occasionally even the Nebbish King himself, Matthew Broderick.  (And wondering, too, how Broderick would have fared in the role; I suspect that at the very least, because Broderick’s a hoofer, he would have had a whole lot more dancing to do.)

Helene Yorke’s Olive is funny and crude and with the mere sound of her voice can shatter glass from fifty yards away; Brooks Ashmanskas, as the male lead in Shayne’s (or Cheech’s) masterpiece, a portly gent growing portlier by the day due to his love of snacks (any snack will do, including dog food) is hilarious; Marin Mazzie as the lustful diva–so heartbreaking some years back in the extraordinary Next to Normal–shows off her comedic chops (not to mention her incredible voice) and then some; Nick Cordero, deservedly Tony-nominated as the menacing and cruel but surprisingly stage-savvy Cheech, is terrific; and Vincent Pastore (of “Sopranos” fame) is appropriately dark and grumpy as the mob boss/night club owner, Nick. (And let’s not forget Trixie the Pomeranian–what a trouper!)

Director Susan Stroman keeps the Allen-scripted jokes (he wrote the book) popping like machine gun fire at a gangland bash; her choreography (this is one of the most dance-heavy shows on Broadway) is acrobatic, energetic, and a joy to watch; the Prohibition-era tunes, culled from the songbook of the period, are charming; and the costumes, sets, and lighting, by William Ivey Long, Santo Loquasto, and Donald Holder respectively, are first-rate.

Yes, the story resolves itself rather abruptly, and surely they could have come up with a better finale than “Yes, We Have No Bananas”. (There was NOTHING written back then that could have ended the action a little more organically, even romantically?)

Nevertheless: Bullets Over Broadway is top-notch entertainment.  It didn’t snag any Tony awards, though, so the closing notice (ah, the injustice!) might be posted any day now.  Catch it before all the heavy artillery is locked away for good. 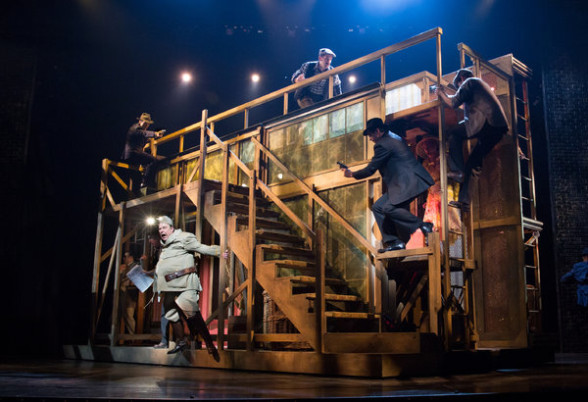