Home Sophisticated Culinary Good Luck Salad (a.k.a. Three-Bean Salad)
Facebook
Twitter
WhatsApp
Email
Print
Three-Bean Good Luck Salad is commonly served on New Year’s Eve, because traditionally it’s believed to bring good luck in the coming year. Well, we in New York are not traditionally superstitious, but we do believe that a delicious and refreshing bean salad is very welcome in the spring and summer! So here’s our very easy-to-follow recipe. 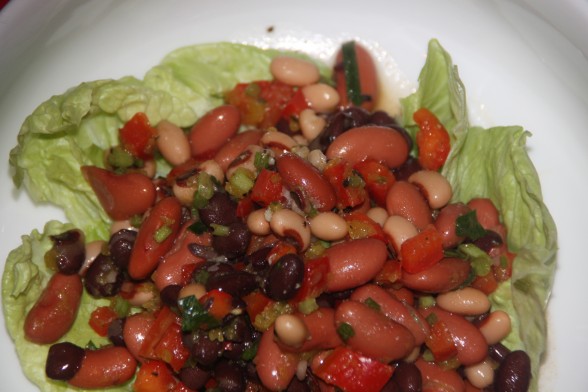 1 cup red beans, soaked for 1-6 hours
1 cup black beans, soaked in 4 cups water for 1-6 hours
1 cup black-eyed peas
3 onions, halved
4 cloves of garlic, minced
1 bay leaf
3 tablespoons salt (1 for each beans cooking)
3 teaspoons toasted cumin
1/3 cup sherry or red wine vinegar
2 garlic cloves, minced
salt and pepper to taste (about 1 teaspoon, combined)
2 teaspoons Dijon mustard
approximately 3/4 cup broth from the beans, adjustable
1/2 cup extra virgin olive oil
2 diced red bell peppers (you can also use one red and one yellow for color variety)
1/2 cup chopped cilantro (substitute: parsley)
lettuce to serve salad on
.
HOW TO MAKE IT:
.
You can cook the red and black beans together. Cook the black-eyed peas in a separate pot, because they cook several minutes faster than the other two.
.
Drain the red beans, discard the soaking water. Drain the black beans over a bowl, and add enough water to the soaking water to measure 8 cups. Combine the beans, water, 2 onions (4 halves), and 3 garlic cloves in a pot, bring to a gentle boil, add 2 tablespoons salt, reduce heat and cook for 45 minutes to an hour, until the beans are tender but still intact. Remove from heat, discard onion halves, drain over a bowl, saving 2/3 cup of the broth for the dressing.
.
In another pot, bring the black-eyed peas to a gentle boil in 4 cups water, add 2 halves of onion, bay leaf, 1 tablespoon salt, 1 garlic clove, and simmer for approximately 45 minutes, until they are tender but still intact. Remove onion halves and bay leaves, drain beans and let them cool off.
.
In a very large bowl, slowly pour the toasted cumin in the beans broth, beating until it’s smooth. Now combine all the other ingredients from the second step mentioned above, stir very well until it’s evenly smooth. Once beans are cold, add them to the dressing and give it a few good stirs.
.
Yield: 8 servings 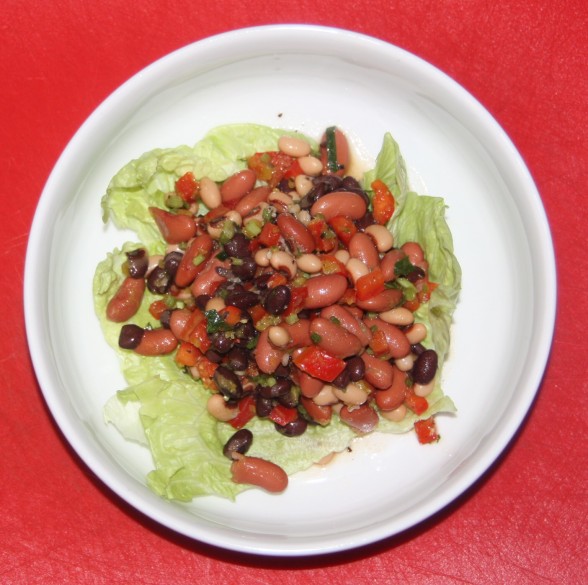 GOOD TRICK: I tried this salad with cooked canned beans and the results were amazing. As for the onions, I added half a chopped red one; vegetable or chicken broth will do the trick for the broth. An interesting result: the salad looks better and not as muddy as when you cook the beans yourself, and it’s still delicious.