That’s the wafer-thin plot of French playwright Yasmina Reza’s 2009 Tony-winning comedy, “God of Carnage” and, by evening’s end, we have indeed witnessed carnage — mostly of the emotional kind. Before their chat is over, tempers explode, accusations are hurled about like poisoned darts, marital bonds are ripped to shreds — and nobody is any the wiser as to WHAT might have happened on that playground. (The boys themselves could probably shed some light on the matter, but they’re nowhere to be seen.)

It takes a little while for the action to get underway — the first fifteen minutes or so are pure set-up, as the two couples, like a pair of boxers, circle and jab, circle and jab, trying to feel each other out — but once it does: duck. All the actors had their moments, but the undisputed star (at least on the evening we saw it; by now, the cast has changed yet again) was stage and TV vet Christine Lahti as the hyper-intense, ranting and raving, delightfully over-the-top Veronica. As her quieter, more respectable husband Michael — desperate for much of the evening to rein her in but largely unable to — British actor Ken Stott was very good; Jimmy Smits as Alan, the smug, self-satisfied lawyer who enjoys a closer relationship with his cherished cellphone than with his own wife (keep an eye on that cellphone, by the way; it plays such an important role in the action, it might as well have been credited in the program), was excellent; and Annie Potts as Alan’s wife Annette, who has the misfortune early on of puking in the wrong direction (yes, puking) was alternately vulnerable and feisty, weak and wrathful, and altogether much, much bigger than her diminutive size would suggest.

If shows about marital warfare are your cup of tea — or for that matter, plays about the perils of parenting–see “God of Carnage”. Thanks to Matthew Warchus’ crisp direction, a taut script by Reza, and the wonderfully funny, no-holds-barred relationships among the characters, it’s the fastest-moving (intermission-free!) ninety minutes on Broadway. 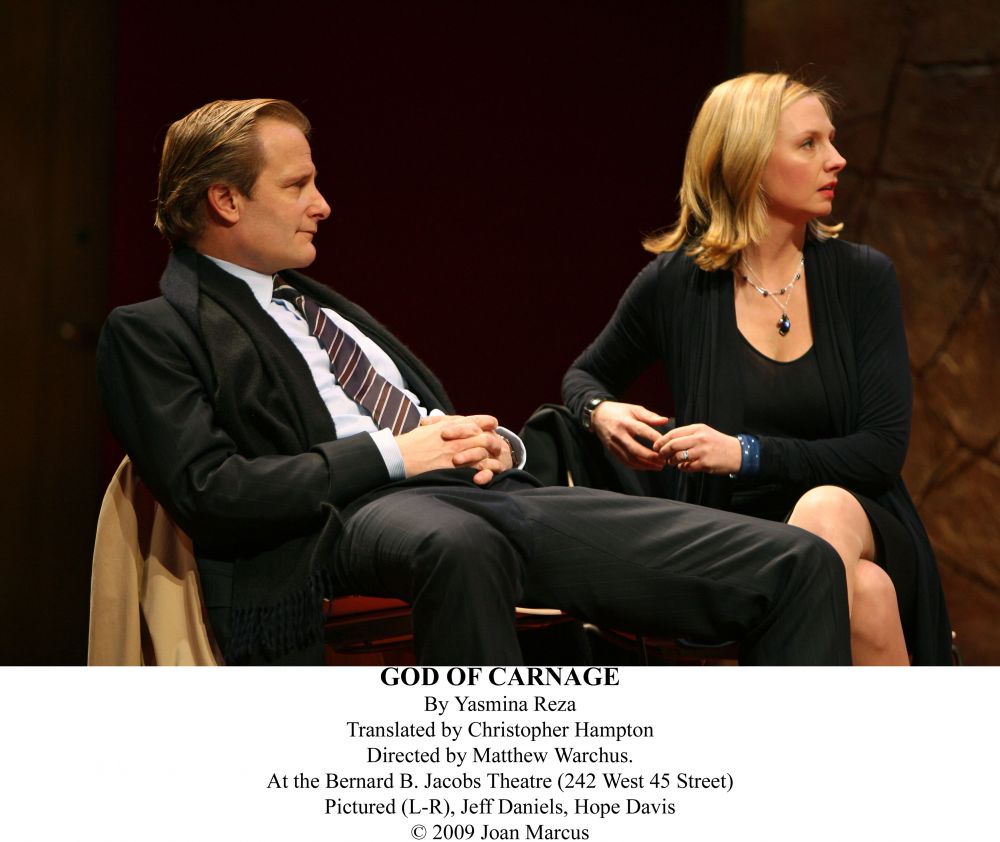