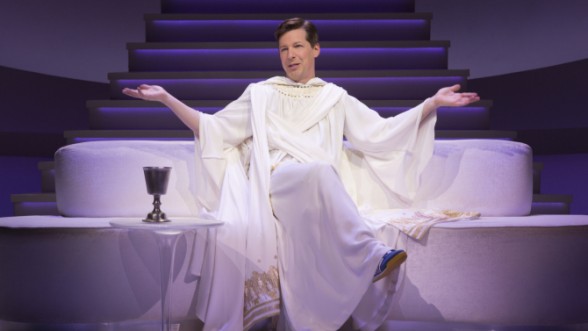 At the Booth Theatre, AN ACT OF GOD reopened. The night I attended, when about 10 people in the audience walked in late, the protagonist, who performs what we can basically call a monologue, joked: “Was it the bridge or the tunnel? By the way, because you don’t have time to check your playbill, it’s Sean Hayes up here.”

And God the Almighty is as gay as ever. Almost annoyingly gay, because it seems exaggerated. Mr. Hayes plays a character which is effeminate, obnoxious, mean, self-absorbed, and lacks attention all the time: Imagine a Donald Trump being president of the country feeling all powerful and saying and doing horrible things that don’t make any sense; that’s the idea of this show.

God is brutal. He lists his horrible deeds consciously and funnily in a way that you will just melt. Or laugh really hard, as I did during the 90-minute performance without an intermission. (They serve cheap wine and charge you the price of a bottle for a glass. It’s Broadway, anyway! I just wished they were more considerate of what we pay so much for.)

Even though it feels like a monologue, Mr. Hayes is not alone onstage. He comes accompanied by two angels who even dare to take a selfie with him.

I couldn’t understand the joke about the Jews being God’s favorite people, or the commercial thing about selling the T-shirts in the lobby, but it’s a very funny show anyway.

Go see it before it closes on September 4th. 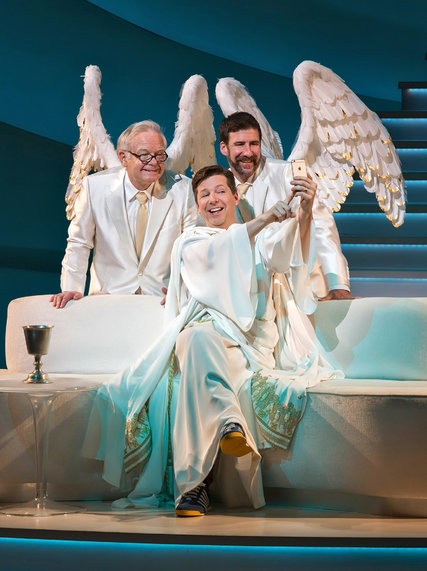