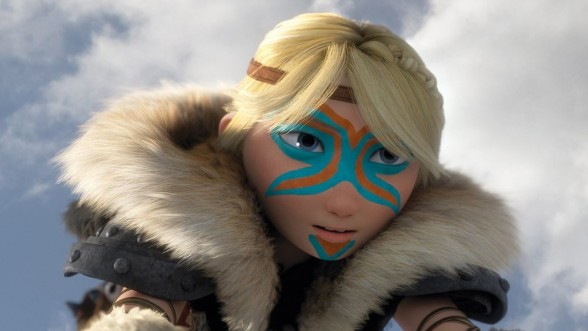 Fire-breathing creatures are all over the pop culture landscape these days: George R. R. Martin has a trio of dragon siblings ready to turn folks into toast in his best-selling “Game of Thrones” novels; the hit TV show based on the books has one of the dragons roaming the skies while the others are chained up in a sewer; and, of course, the most recent “Godzilla” reboot saw the Big Guy himself emerge from the ocean’s depths to lay waste to half of mankind (or so it seemed).

Now we can add to that list big, cuddly, but no-less-dangerous Toothless, one of the stars of “How to Train Your Dragon 2”, DreamWorks’ follow-up to their animated hit of 2010.

Accompanying Toothless once more is Hiccup, the wide-eyed, shaggy-haired and VERY un-Viking-like son of Viking village chieftain, Stoick.  As the sequel begins, Stoick is about to step down and hand the reins of leadership over to his son–only Hiccup isn’t at all sure he’s up to the challenge.

But that, as it turns out, isn’t his only problem: he soon learns that a big, ugly brute named Drago has been kidnapping dragons–including all the domesticated dragons in Hiccup’s village–so that he could brainwash the lot of them and then sic them on their masters.

Will Hiccup and his tomboy gal-pal Astrid foil Drago’s evil plan? Will Toothless himself turn heel? Will Hiccup get him back?

This isn’t entirely a comedy, as so many animated movies are; it’s more of an action flick featuring some mighty exciting set pieces, with a few laughs thrown in along the way to lighten the mood. (How serious is it? Spoiler alert: even though the story ends happily, one of the central characters DOES die, violently and unexpectedly.)

Jay Baruchel, the voice of Hiccup, is fine; America Ferrera and Cate Blanchett as his girlfriend and long-lost mother/rescuer of dragons, respectively, are terrific; Gerard Butler displays just the right mix of gruffness, toughness, and even, when the occasion demands, sensitivity as Hiccup’s big old bear of a dad; and Craig Ferguson, in the small but charming role of Stoick’s crony, Gobber, adds his own brand of levity to the proceedings.

The dragons are colorful, the backgrounds are beautiful, and the dragon fights are so darn believable, you’re going to hope the nearest firehouse is on standby.

“How to Train Your Dragon 2” is a visual feast.  I can hardly wait to see what all these frisky fire-breathers–and the humans who love ’em–have in store for us next.