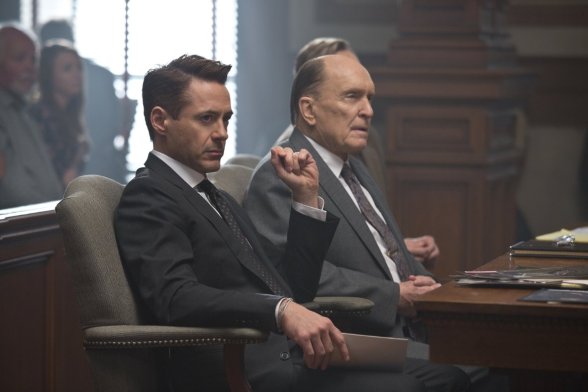 The Judge is a big-screen movie with a small-screen, TV-movie-of-the-week vibe and a hackneyed plot–but absolutely splendid performances.

Robert Downey Jr. is Hank Palmer, a hotshot Chicago lawyer who specializes in representing the guilty and pissing off opposing counsel.  When he learns that his mother has died back home, he returns to his small-town roots and comes face-to-face with the father–played by Robert Duvall–from whom he’s been estranged for years.  Their already spotty relationship goes from bad to worse when a) he finds out that his father is dying, and b) Dad runs someone down while out driving one night and is about to be charged with murder.

Soon, Hank finds himself not only revisiting the tricky terrain of their relationship, not only tending to his dad in ways he never imagined, but also defending the old man–who happens to be the town judge–in court.

Downey is one of our finest screen actors–yes, even in the “Iron Man” movies, and his other lightweight films–and he doesn’t disappoint here.  Frustrated and angry around his father, tender and playful with his young daughter, who comes to visit him from Chicago, quietly lustful whenever he’s in the company of his ex-girlfriend, who now owns (and doesn’t just work at) the town diner, Downey has a lot of notes to hit, and he hits them all out of the park in a nicely-calibrated, well-rounded performance.

But–even though this is, unmistakably, Downey’s movie–it is Duvall’s extraordinarily detailed portrayal of Papa Joe that is the film’s real highlight. Tough as nails, morally superior, sitting in judgment on everyone and everything (and not just from the bench), given to sudden bursts of anger yet also, when his ravaged body begins to betray him, as needy as a newborn (he has a scene with Downey, one in which his son sees for the first time the illness’ devastating effects, that will break your heart), Duvall turns Joe Palmer into a living, breathing symbol of the horrors of growing old.

Vera Farmiga is sexy and utterly believable as Hank’s former flame; Vincent D’Onofrio and Jeremy Strong turn in fine work as Hank’s brothers; Billy Bob Thornton underplays nicely as the prosecuting attorney; and the youngest member of the cast, Emma Tremblay, is delightful as Hank’s little girl, Lauren (their reunion scene, after she comes to visit, is a wonderful, change-of-pace gem).

At times the action drags, and director David Dobkin tacks a couple of unnecessary scenes onto the end that make the film run a tad too long. No matter: The Judge is a triumph for everyone on screen, but Downey and Duvall, especially.  If you appreciate fine acting, it’s well worth a look. 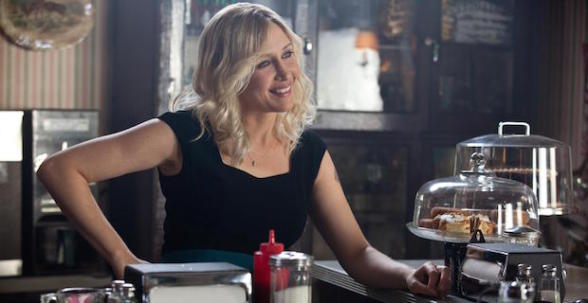 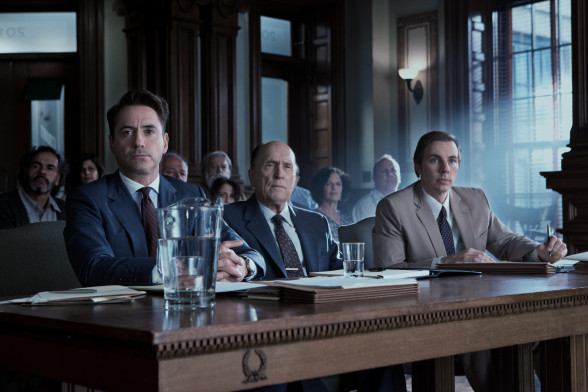