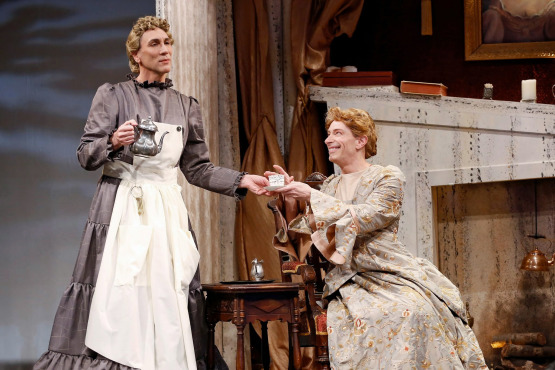 Nope–just the newest revival of the late Charles Ludlam’s Ridiculous Theatrical Company hit of 1984, The Mystery of Irma Vep.

Robert Sella and Arnie Burton (clearly having every bit as much fun as their audience) play all the parts in this quick-change romp–it’s written for just two actors, and a gamer, peppier pair of pros would be hard to find–including Lady Enid Hillcrest, her haunted-by-his-first-wife Egyptologist husband, Lord Edgar, Jane the maid, Nicodemus the handyman…and others.  From first scene to last, Sella and Burton are called upon to change costumes at the drop of a hat (or a wig); kudos to the backstage crew for never missing a beat.  Kudos, as well, to Ludlam himself, for cramming into the action so many sly (and occasionally not-so-sly) references: what other show, on Broadway OR off, features werewolves, vampires, mummifed Egyptian princesses, haunted paintings, mad-as-a-hatter servants, secret rooms–and more?

The plot–and there’s a lot of it–uses Hitchcock’s Rebecca as its starting point and capers merrily along from there.  The hilarity shifts from the Hillcrest estate to an Egyptian tomb, then back to the estate; lightning flashes, wolves howl, mummies come to life…and we’ve barely begun Act II!

Everett Quinton (Ludlam’s collaborator and, along with his partner, one of the show’s original stars) directs; the delightfully cheesy sets are by John Arnone; the costumes by Ramona Ponce; and the lighting by Peter West.

Bottom line: if all the characters, costume changes, and film and literary references prove to be a tad hard to follow…don’t fret.  Just take your seat, hold on tight…and go along for the ride.