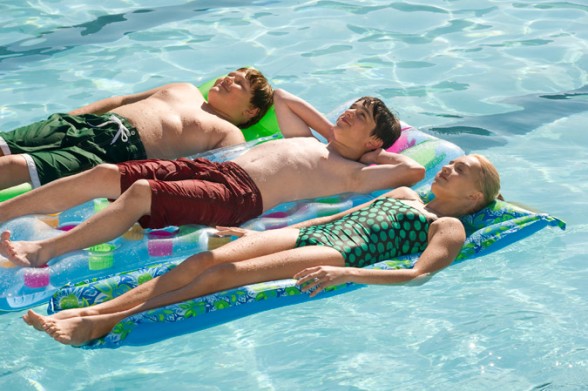 Q: What’s the best time to release a lightweight movie about the highs and lows of summer vacation?
.
A: Why, during summer vacation, of course.
.
Not, as it happens, that the beleagured teen at the heart of “Diary of a Wimpy Kid: Dog Days” is having much of a vacation. Or, to put it another way: he doesn’t encounter many highs, but the lows … that’s another story.
.
School’s out, and glum-faced Greg Heffley’s problems are just beginning. He wants to hang with pretty blonde Holly, but can’t seem to get her phone number; his older brother Rodrick, a would-be rocker dude who is more clumsy than cool, continues to mock him at every turn; his Dad tries so hard to bond with him that he ends up dragging him off to ultra-nerdy Civil War re-enactments; his Mom thinks the best way to help is to encourage Greg to join a book club; and even his best friend, the chubby, easygoing Rowley, thinks that all Greg needs is a “fun-filled” weekend with HIS family (an ill-advised plan that ends, predictably, in disaster).
.
But it’s when Dad suggests that Greg spend the summer working as an intern at his office that Greg decides his back really IS against the wall. His solution? Pretend he’s snagged a job at a nearby country club, where Rowley and his parents happen to be members and — more importantly — sweet young Holly will also be spending quite a bit of time.
.
The fact that even this doesn’t work out should come as no surprise — it wouldn’t be much of a movie if it did.
.
Reprising his role yet again as downtrodden Greg (this is the third of a series, all based on the bestselling  “Wimpy Kid” books by Jeff Kinney), Zachary Gordon is charming; Devon Bostick as his brother, Rodrick (my personal favorite) brings just the right amount of goofiness and big-bro bossiness; Robert Capron as Rowley is the kind of cheery, true-blue friend anyone would want to spend time with; and while Steve Zahn as Greg’s Dad is, now and again, a little too bug-eyed, too hammy, Rachael Harris makes up for it with a much more subtle performance as his well-meaning but misguided Mom.
.
“Diary of a Wimpy Kid: Dog Days” may be as shallow as a sitcom, and the big Sweet 16 party at the end may not amount to much, but that’s not to say that this little trifle isn’t amusing in spots, and Jeff Kinney’s occasional drawings — borrowed directly from the books — have a charm, and an innocence, all their own.
.
FILM REVIEW by Stuart R. Brynien