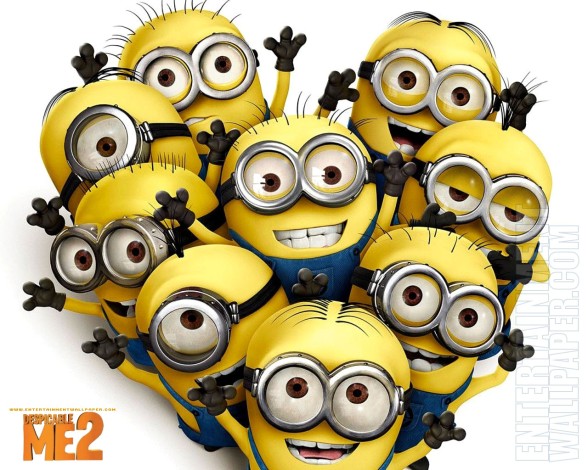 Time to ‘fess up: as the trailers ended and “Despicable Me 2” began, I couldn’t help wondering if I was at a distinct disadvantage. I hadn’t even seen the first movie; would I be able to follow the plot? Identify the characters without a scorecard? Would I even be able to enjoy the darn thing?
.
I needn’t have worried.
.
A recap: Gru is a hawk-nosed, chrome-domed super-villain-in-retirement with three adorable daughters. They love their dad to pieces, even if he DOES bear more than a passing resemblance to Uncle Fester of the Addams Family.  They also don’t mind that he devotes so much of his time–when he’s not planning birthday parties, that is, or casting a wary eye on his oldest daughter’s new boyfriend–to making jams and jellies in an enormous plant so smoothly efficient that it would put the labs at NASA to shame.
.
Gru, in other words, is just another single dad in the ‘burbs–and loving every minute of it–when the AVL comes calling (that’s the Anti-Villain League). Their aim: to talk him into helping them find the ruthless baddie who recently knocked off a top-secret Arctic Circle research installation–AND has created a supremely dangerous “growth ray” capable of turning cuddly little rabbits into massive, man-eating monsters. He’s reluctant, at first–he’s got his family to think about, after all–but soon the agent sent to recruit him (a screwy redhead named, appropriately, Lucy) has convinced him to “un”-retire and join her in some spy games at the local mall where her bosses believe the bad guy is hiding.
.

Who is “Mr. Big”? Is it the rotund owner of the popular restaurant, who looks a lot like Gru’s old archenemy, El Macho? Is it the diminutive and hilariously-coiffed proprietor of the nearby wig emporium? Or somebody else? Will Gru and Lucy stop him before he (BWAH-hah-hah!) takes over the world?

And, not incidentally, will Gru and Lucy–who fall for each other–ride off into the sunset, with not one, but THREE little flower girls in tow?

Steve Carell as Gru, using an Eastern European accent of indeterminate origin, is terrific; Kristen Wiig is perfectly charming as the lovestruck but resourceful Lucy; and Benjamin Bratt as the restauranteur, Eduardo, and Miranda Cosgrove as the eldest daughter, Margo, who enjoys (albeit briefly) a romance of her own, are wonderful.  (And let’s not forget Gru’s yellow-skinned, bullet-headed “minions”; as voiced by the film’s directors, Pierre Coffin and Chris Renaud, their madcap antics and nonstop gibberish are worth the price of admission alone.)

Two things set “Despicable Me 2” apart: its vibrant palette (you won’t see a brighter, sunnier-looking animated movie this year), and the script.  Screenwriters Ken Daurio and Cinco Paul, almost always choosing the witty, sophisticated joke over the crude and juvenile one (for example, there are only two–count ’em, two–fart jokes in the entire film) have turned out a kid flick that even the grown-ups in the audience will appreciate.