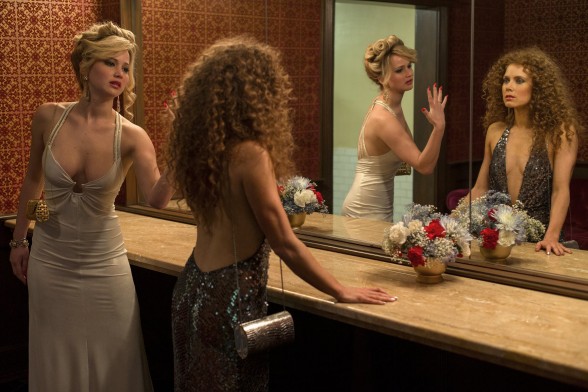 Christian Bale stars as dry-cleaning mini-mogul/con man extraordinaire Irving Rosenfeld, who–along with new girlfriend Sydney Prosser (Amy Adams), a gifted con artist in her own right–is recruited to run the scam by fast-talking FBI agent Richie DiMaso (Bradley Cooper); by the time the con has run its course, marriages are in tatters, careers are ruined, and even cold-blooded Irving is beginning to feel guilty about the people whose lives he’s destroyed.
.
They’re all quite good, with their Bronx and Jersey and even London accents and their outrageous ‘pieces and do’s.  Irving wears (in Sydney’s estimation) an “elaborate” combover; government recruiter Richie sports a tight, shiny perm; and New Jersey politico Carmine Polito, played by Jeremy Renner, wears a pompadour about as high as Kilimanjaro.
. 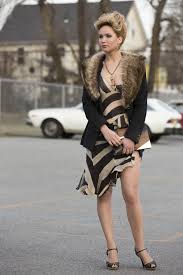 Seeing The Hunger Games‘s Katniss Everdeen in Jennifer Lawrence, who plays Irving’s gorgeous young wife, or Batman in Bale, or the Avengers’ Hawkeye in Renner, takes some work.  Even Robert DeNiro, as craggy mob enforcer Victor Tellegio, looks remarkably different.  But if some of the faces aren’t entirely recognizable, it isn’t only because of the make-up; the actors skillfully burrow deep into their characters to dig up the scammers–and victims–beneath.
.
The score–featuring 70s-era hits and even one or two commercial jingles–is a blast; the improvised vibe in some of the scenes gives the film its comedic edge; and the period details–from the cars to the clothing to the disco-era club scene–are terrific.
.
American Hustle isn’t Russell’s best.  It’s a bit long, clocking in at a hefty two-and-a-quarter hours.   The characters are so unlikable, there’s hardly anyone to root for.  And the plot is complicated enough that you’re going to be tempted to take notes.
.
But, despite its flaws, it is up for a Best Picture Oscar–and several others, as well–and come Oscar time, it just might win all the marbles. 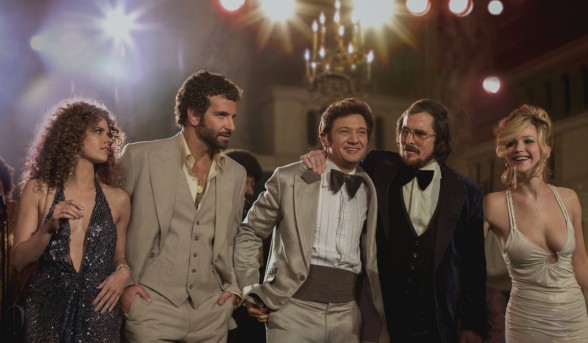