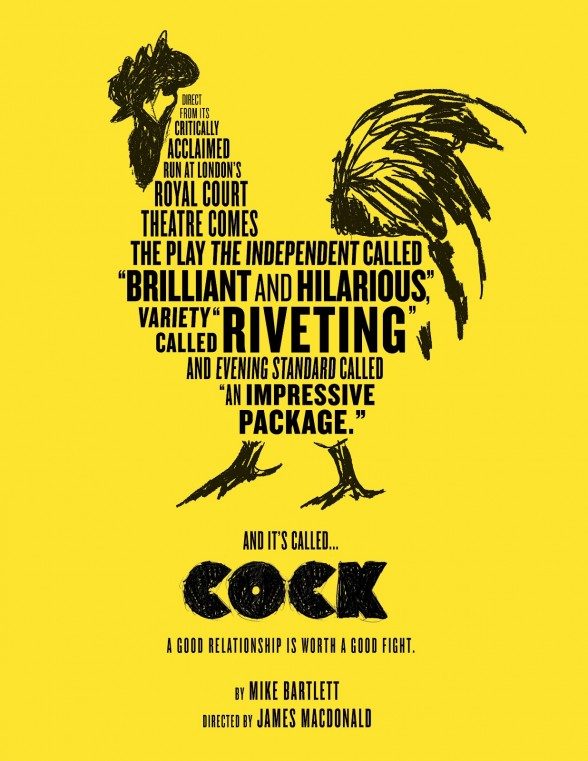 John, an attractive young gay man, is in love with two people: his live-in boyfriend, a slightly older, hyper-critical fellow, and — surprisingly, even to him — a sweet-natured woman he bumped into one morning on his way to work.

Such is the basis for Mike Bartlett’s slimly plotted but emotionally complex new comedy-drama, “Cock”. John is forced to ask himself: Should I leave my longtime partner for this woman I hardly even know, or stay where I am? And, of course, as John is forced to examine his own sexuality: Am I gay? Bi? Or am I (amid all the soul-searching, this comes up too, as the play nears its devastating conclusion) — actually straight?

As you may have heard, the theatre (the Duke on 42nd Street) has been converted into a cockfighting ring (an apt metaphor), with a few rows of plain wooden bleachers surrounding a tiny “stage” down below, on which the action, every last bit of it, takes place. There’s no set, not a stick of furniture, yet director James Macdonald uses this most miniscule of playing areas to great effect: before John and his boyfriend begin each gut-wrenching exchange, they face off, circling each other like two prizefighters looking for an opening … or two roosters preparing for battle. When John and his girlfriend “hop into bed”, they perform a kind of long and sensual pas de deux, never kissing, never touching, but always — again — just circling, circling. And when the clothes “come off” — as they do (predictably) more than once — they actually stay on; nothing is removed, not a shirt, not a skirt, not a pair of pants. Ingeniously, everything is left to the audience’s imagination. (This may be the most chaste play about love and lust you will ever see.) 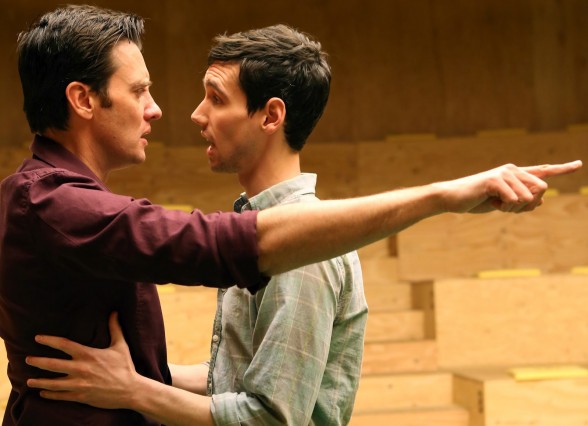 The acting is first-rate. Cory Michael Smith plays John with just the right amount of vulnerability and confusion, and — most impressively — never leaves the stage, and, for that matter, hardly ever leaves his feet; the role is that demanding. Jason Butler Harner as his boyfriend is superb, harsh and cruel and even, at times, heartbreaking; Amanda Quaid as the “other woman” — the person who forces John to take stock of his life — has some powerful moments, particularly at the end; and Cotter Smith as the boyfriend’s Dad — recruited by his son to sort of arbitrate the whole sad affair — is well-intentioned, but ultimately clueless and helpless. 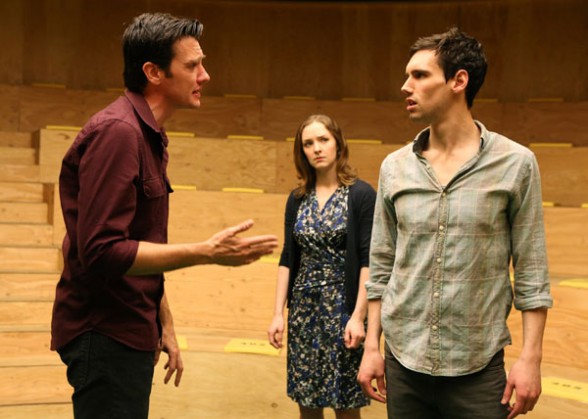 Bottom line: “Cock” is tightly written, intimately staged (you’re so close to the action, you might as well be a part of it), and brilliantly acted. It should not be missed.