A few years ago I had dinner with my friend playwright Douglas Carter Beane at Rosa Mexicano in Union Square, and one thing I could never forget about that experience–besides being able to be with a friend who has written so many fascinating Broadway shows and Hollywood big hits–was a dish I thought was a slightly different guacamole. I actually loved the fact that the avocado wasn't smashed, it was actually cubed, with jalapeno, which made it just as spicy as I like. Naturally, this … END_OF_DOCUMENT_TOKEN_TO_BE_REPLACED

There are several variations to Niçoise salad, but according to Wikipedia two basic ingredients commonly used in the world are not present in Nice, France, where the salad is originally from; they are green beans and potatoes. However, we don't seem to be able to think of this delicious salad without these two cooked vegetables, so here is the world's version against the French. By the way, we use-hard boiled eggs in this recipe because, at home, we cook large amounts of food to store in the … END_OF_DOCUMENT_TOKEN_TO_BE_REPLACED

Originally from the region of Nice, pan-bagnat (bathed/wet bread) is a delicious sandwich worth making and keeping in the fridge for lunch or dinner. In France they use pain de campagne ("country bread"), which we weren't able to find for this recipe here in New York. Ingredients: 1/2 cup extra-virgin olive oil, split about 1 teaspoon sea salt--or to taste about 1 teaspoon black pepper--or to taste 1 small red onion, thinly sliced 1/4 cup pitted olives, sliced 1 red bell pepper, … END_OF_DOCUMENT_TOKEN_TO_BE_REPLACED 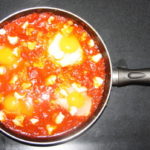