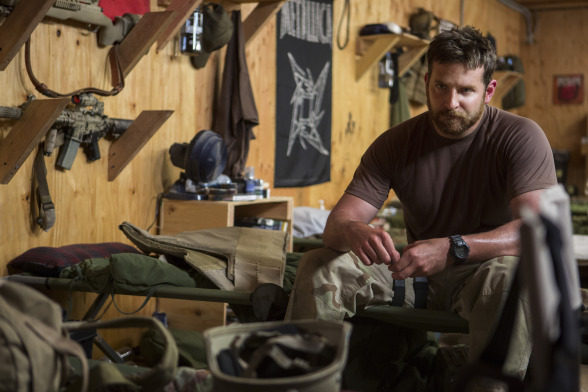 When we first meet Kyle, he’s lying flat on his belly on a rooftop in Iraq, drawing a bead on a pair of locals — a woman and a boy — crossing the street below.  He has only seconds to decide: Do the two of them pose a threat? Do they present any kind of danger to the small Marine unit stationed nearby? Or are they merely out for an afternoon stroll?

Then the woman pulls out from beneath her robes a Russian-made rocket grenade and hands it to the boy. In that instant, Kyle’s mind is made up.  He drops them in their tracks–no one is safe once Kyle has them in his crosshairs, not even a child — the device explodes ineffectually nearby, the Marines are saved, and Kyle — who, over the course of his career, was credited with no fewer than 160 confirmed kills — notches, in rapid succession, his first two.

The movie shows us a lot of these kills, sometimes one after another; it’s a crazed and chaotic world that Kyle inhabits, one in which death can strike anywhere, anytime, and from any angle (Kyle himself, of course, being one of its chief and most proficient purveyors), a hot, dusty place where danger lurks around every corner, hides behind every door and window, peers down from every rooftop.  We watch as Kyle provides expert cover for boots-on-the-ground Marines conducting a house-by-house search, mows down Al Queda ops like ducks in a shooting gallery, squares off against an unseen enemy sniper who proves to be just as professional and cold-blooded as he is, and, most importantly, saves countless lives — military and civilian alike.

As the quintessential Man of Action, Cooper — all beefed-up body and Texas twang — delivers a low-key, carefully-calibrated performance.  He banters with his buddies and talks (although hardly ever about his job) with his wife and kids back home, generally between deployments, but for the most part he’s a fellow of few words, and (until the end, at least) even fewer qualms, fewer misgivings;  he carries the proverbial Big Stick and knows, and is proud that he knows, how to use it.  His pale blue eyes — so laser-like in their intensity as they zero in on their target that they don’t shift, don’t dance, sometimes they don’t even blink — are mesmerizing.  You can’t look away from them…or him.

The action scenes — and there are plenty — are loud, bloody, and breathtakingly believable…the cinematography, with its sun-baked, nearly monochromatic tableaus (each Iraqi street looks even hotter and dustier than the last) is top-notch…Eastwood’s talent for ratcheting up the suspense has never been more evident…and the supporting cast, particularly Sienna Miller as his wife, is terrific.

Much has been said about how American Sniper seems to be celebrating war when it ought to be condemning it; how questions are never raised about the spurious reasons our fighting men and women were sent to Iraq in the first place.

My response: there’s no denying that “Sniper” is a staunchly pro-military film; all the soldiers — including, of course, Kyle himself — are portrayed as nothing less than America-first, all-too-willing-to-put-their-lives-on-the-line heroes.  But that doesn’t mean it’s pro-WAR.  This is what it is: a gritty, nasty, nail-biting look at what it takes to wage, and win, a war; an extended glimpse at the horrors of life on a faraway killing field, where few of the natives are your friends, and many of them are your enemies.

Bottom line: You don’t have to be a warmonger to appreciate the brilliance of American Sniper.  It’s a compelling piece of filmmaking, no matter which side of the U.S./Iraq debate you’re on.

(NOTE: In an ironic twist of fate, Chris Kyle — finally home to stay after four tours of duty in Iraq — was, along with his buddy, Chad Littlefield, gunned down at a Texas shooting range by a troubled ex-Marine in February of 2013.  The killer, Eddie Ray Routh, has pleaded insanity, and is currently on trial for their murders.)