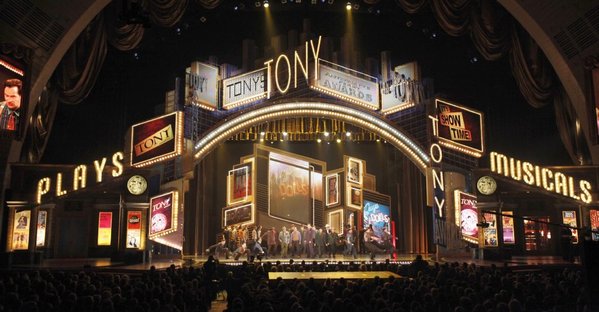 It’s that time of year again, when Broadway rewards its best, everyone at CBS wonders if maybe the whole thing shouldn’t be on PBS after all, and media pundits across America ask the same question they ask every spring: WILL this play in Peoria?

Yes, it’s time for the Tonys again, and on Sunday, June 9th, we’ll all find out who won, who lost, and whose show will be riding off into the proverbial sunset because it didn’t get enough love from the voters.

First, some random thoughts, and then my predictions…

OK, I’m going to hop on the bandwagon and make what’s shaping up as the easiest call of the night: “Matilda” will win Best Musical, and by evening’s end, its stars Bertie Carvel, Gabriel Ebert, and Lauren Ward will be clutching Tonys for their amazing (and, in Ms. Ward’s case, amazingly touching) performances. “Matilda” is splendidly acted, perfect for kids and grown-ups alike. Carvel’s transformation into that most sadistic of schoolmarms, the towering Miss Trunchbull, is a sight to behold; Ebert, as Matilda’s heartless, conniving Dad, brings to the role a loose-limbed gait and clownish grace not seen since Dick Van Dyke in his heyday; and Lauren Ward as Matilda’s big-hearted teacher, the aptly-named Miss Honey, always manages to bring the action back down to earth just when it appears that all the shenanigans are about to spiral out of control. I wouldn’t be surprised, or disappointed, if “Matilda” took home a bunch of other Tonys as well, including for direction and choreography. (And kudos to all the prodigiously talented young ladies who alternate in the title role; collectively, they are receiving an honorary Tony, and deservedly so.)

One more thing: No nomination for Lesli Margherita’s hilarious turn as the clueless, loveless, tango-crazy Mom in “Matilda”? A nomination and win here could have led “Matilda” to a clean sweep in all the major acting categories. Alas!

But enough about “Matilda”…

My favorite among the Best Musical nominees NOT featuring a precocious little girl: “Bring It On”, the cheerleading musical starring a whole pom-pom waving squad of a lot of uber-talented BIG girls. When was the last time I saw a show about cheerleaders? How about never?

If the Cyndi Lauper-scored pop fest “Kinky Boots” hadn’t been so derivative–Harvey Fierstein’s book is a hodge-podge of ideas borrowed from a number of other shows, including some of his own–I would have enjoyed it a whole lot more. (And heck, thanks to Billy Porter’s divalicious turn as the drag queen, and that utterly infectious score, I enjoyed it plenty.)

Richard Kind was the very best thing about “The Big Knife”, and, unlike some folks, I thought there were some mighty good things about it, already.

I’m not a huge fan of “Virginia Woolf”– with all the yelling and screaming and imbibing, it all becomes sort of tedious after a while–but I certainly couldn’t fault any of the actors, including nominees Tracy Letts, Amy Morton, and Carrie Coon, who were mesmerizing from first toast to last.

“The Mystery of Edwin Drood”, from the diabolically clever mind of Rupert Holmes, was spectacular fun, a big, old-fashioned audience-participation whodunit, and it was good to see it on the ballot.

Also good to see: David Hyde Pierce, always a treat, back on Broadway in “Vanya and Sonia and Masha and Spike”; Nathan Lane, exercising his dramatic chops (and make no mistake, he’s got’ em) in “The Nance”; and Tom Hanks, making his long-awaited Broadway debut in “Lucky Guy”.

HOW old is Cicely Tyson? My gosh, what a pro!

The short-lived “Chaplin”, starring the talented (and VERY nomination-worthy) Rob McClure, would have received more love, I think, if it hadn’t been such a paint-by-numbers bio-play, had been allowed to BREATHE a little. As it is–congratulations, Mr. McClure.

AND FINALLY,  IN THE CATEGORY I LIKE TO CALL “MOST EGREGIOUS OVERSIGHT”:

No nomination–not one–for the (as usual) immensely entertaining “Jekyll and Hyde”? Constantine Maroulis was a real trouper (and, in the guise of the supremely PO’ed and sexually charged Mr. Hyde, a real
rocker, too), and Deborah Cox was magnificent as the lonely and unloved prostitute, Lucy. Yet the nominating committee showed no love for either of them–or for the show itself.

BEST REVIVAL OF A MUSICAL
Annie

BEST ACTOR IN A LEADING ROLE IN A PLAY
Tom Hanks, Lucky Guy

BEST ACTRESS IN A LEADING ROLE IN A PLAY
Cicely Tyson, The Trip to Bountiful

BEST ACTOR IN A LEADING ROLE IN A MUSICAL
Bertie Carvel, Matilda

BEST ACTRESS IN A LEADING ROLE IN A MUSICAL
Patina Miller, Pippin

BEST ACTOR IN A FEATURED ROLE IN A PLAY
Richard Kind, The Big Knife

BEST ACTRESS IN A FEATURED ROLE IN A PLAY
Judith Light, The Assembled Parties

BEST ACTOR IN A FEATURED ROLE IN A MUSICAL
Gabriel Ebert, Matilda

BEST ACTRESS IN A FEATURED ROLE IN A MUSICAL
Lauren Ward, Matilda