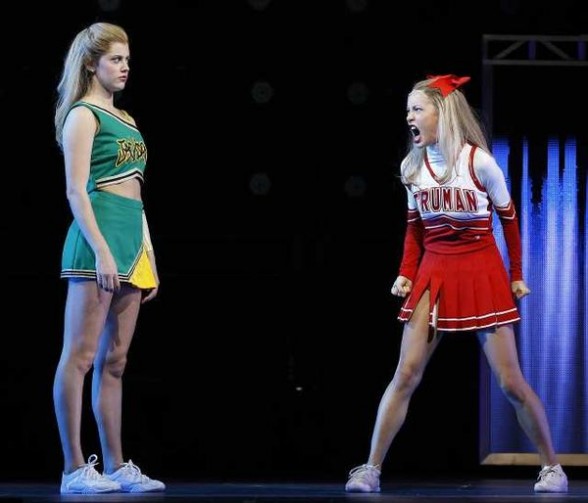 Some musical comedies are exhilirating.
.
Some — bless their creators’ hearts — are actually funny.
.
And then there are shows like “Bring It On”, which somehow manages to be both.

.
A story of teen angst as told through the prism of a high school cheerleading competition, “Bring It On” stars Taylor Louderman as blonde, goody-two-shoes Campbell Davis, whose dream of leading her Truman High School cheerleading squad to victory in an upcoming tournament is abruptly derailed when she is “re-districted” to the inner-city, and decidedly less whitebread, Jackson High. Not only is she the proverbial fish out of water, but — horror of horrors! — Jackson doesn’t even have a cheer squad. (A hip-hop crew, yes; a cheer squad — no.)
. 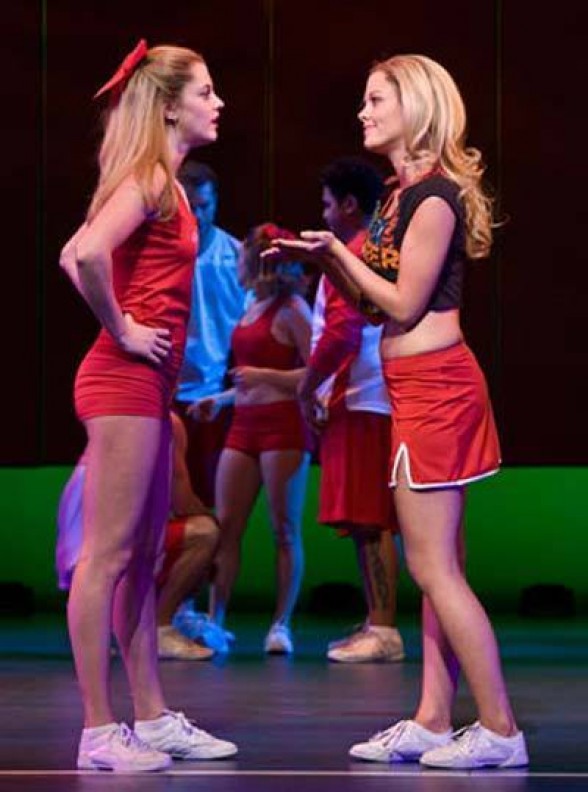 Will Campbell learn to fit in? Will she be able to teach her suspicious new schoolmates the joys of cheerleading? And, if she can, will she be able to lead them to victory over her old school, and all the friends (and enemies) she left behind?
.
The cast is almost completely comprised of Broadway newcomers. Louderman is simply wonderful as Campbell; she’s got a high-wattage personality, the acting chops to handle some of the book’s more sensitive moments (there are a few), and — most importantly — she can sing. Ryann Redmond as Bridget, the chubby girl who starts off hiding beneath an oversized mascot’s costume, but ends up as a cheerleader brimming with confidence, is pixie-doll cute, a terrific singer in her own right, and a gifted comedienne. Elle McLemore as the duplicitous Eva, Adrienne Warren as Danielle, the leader of the Jackson “crew” who reluctantly takes Campbell under her wing, and Jason Gotay as Campbell’s new boyfriend Randall, also shine.
. 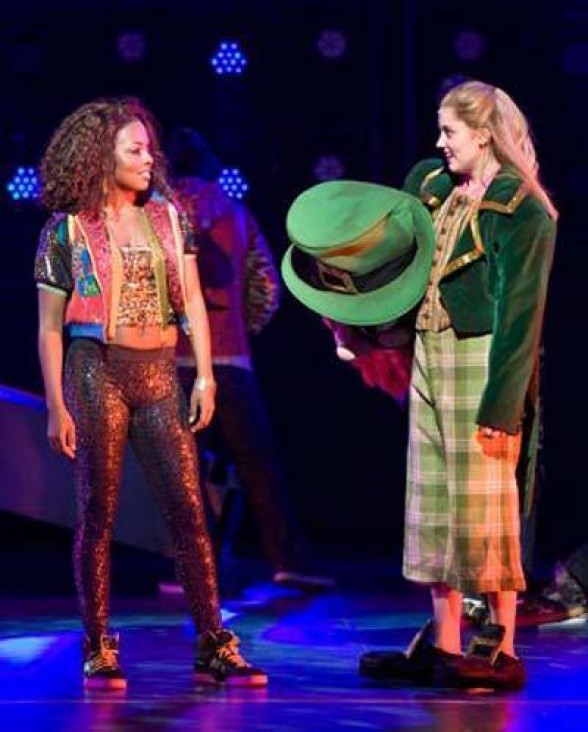 Sure, librettist Jeff Whitty (“Avenue Q”)  breaks no new ground with his cast of cliches: the sweet cheerleader, the bitchy, ultra-competitive cheerleader; the sassy black girl, the slide-steppin’, hip-hoppin’ rapper, the socially awkward and virginal chubette; there’s even a hip-shaking, finger-snapping drag queen, who knows more about how hard it is to fit in than all the other outcasts combined.
.
But Whitty’s book is funny, and, at times, even touching; the music by Tom Kitt (“Next to Normal”) and Lin-Manuel Miranda (“In The Heights”) with lyrics by Miranda and Amanda Green (“High Fidelity”) are wonderful, and the staging by director/choreographer Andy Blankenbuehler (“In The Heights”) keeps things humming along, especially,  of course, during the high-flying, awe-inspiring, cheerleading sequences. (My one complaint: there weren’t enough of them. Alas!)
.
“Bring It On” — based loosely on the 2000 movie — might just make you leap out of your seat and bust a move or two, yourself … whether you’ve ever waved a pom-pom, or not.
.
THEATRE REVIEW by Stuart R. Brynien