It’s as integral a part of the landscape as any in New York City.  Like just about everything else, though, it’s pretty much taken for granted, but this marvel of 19th century technology and engineering has stood the test of time… and then some.

German immigrant John Augustus Roebling had already achieved success in building several bridges in the United States when, in 1855, he proposed a suspension bridge be constructed over the East River that would connect the boroughs of Brooklyn and Manhattan.  Roebling’s proposal wasn’t greeted with much enthusiasm but finally, in 1867, the project was given the green light and on January 3, 1870, the actual work began.

Roebling, however, would not live to see his vision become a reality.  While examining potential locations for a Brooklyn tower site, Roebling’s foot was crushed by an incoming ferry causing tetanus and ensuing death. Roebling’s son Washington would now oversee the project.

The first order of business were the Brooklyn and Manhattan foundations.  3000-ton pneumatic caissons — large, airtight cylinders — would enable workers to clear away layers of silt: 78′ below the river on the Manhattan side, 44′ below on the Brooklyn end.  These foundations alone would take three years to complete.

If you think it’s no picnic sitting in a cubicle in front of a computer screen today, try and imagine reporting for work and spending your day in one of these caissons.  Due to pressurization, workers experienced confusion with pulse rates that would fluctuate dangerously.  Speaking became extremely difficult.  Disorientation was common.  And, to top it all off, the pay for immigrant workers was a rather paltry $2.25 a day — about 45 bucks in today’s economy.  And let’s not forget the fires, explosions and Caisson Disease (aka “The Bends”) that took the lives of at least twenty men.

Between 1873 and 1877 work progressed under the eye of Washington Roebling.  The two Neo-Gothic towers — built of limestone, granite and Rosendale cement — would eventually rise 276′ above the water.  Next up would be the vast sea of cables that would span the river…

In February of 1877, work began on spinning the four cables at the Manhattan and Brooklyn anchorages.  Roebling — perhaps something of a visionary like his father–broke with tradition and introduced the use of steel, or “the metal of the future” as he so aptly put it.  The four cables, which could each hold 11,200 tons, connect the anchorages with both towers.  Each main cable has a diameter in excess of 15 inches and is composed of 19 strands containing a total of 5,434 steel wires.  When the main cables were completed in October, 1878, workmen strung wire ropes from the cables to the bridge floor, creating the spider-web look.  More than 14,000 miles of wire were used for these “ropes.”  All a bit mind-boggling, huh?

Work continued for the next six years:  roadways, understructure, trusses and two terminal buildings complete with ornate ironwork and plate glass windows took shape.  As a finishing touch, Roebling had seventy blue-white electric lamps installed along the promenade, set at 100′ intervals.  Now, fourteen years after work had begun, it was finally drum-roll time…

The official opening of the Brooklyn Bridge took place on May 23, 1883 with President Chester Alan Arthur and New York Governor (and future president) Grover Cleveland dedicating the spectacular structure before 14,000 invitees.  Washington Roebling’s wife Emily, who had helped oversee the entire project, was given the first ride across the bridge with a rooster in her lap — a sign of victory back in the day!  About 150, 000 people forked over a penny to cross the bridge that day.  Quite a few considering the population of Brooklyn was around half a million, and that of Manhattan about twice that.  Things have changed a bit since then.

Very shortly after — on Memorial Day 1883 — a woman ,ascending the steps on the Manhattan side, tripped.  Her female companion overreacted and let out a scream which triggered a rumor that the bridge was on the verge of collapsing.  Result? A stampede that killed 12 and injured 35.

[Author’s Aside]
Speaking of a stampede, a group of us decided the bridge would be a great vantage point to view the fireworks commemorating the Statue of Liberty’s 100th anniversary back in 1987.  Unfortunately, it seemed as though half of New York had the same idea.  The fireworks were due to start around 9 so I guess we arrived at the bridge at 7.  At first, no problem.  Then the crowd started coming.  And coming. And coming.  Within about a half hour it was fast becoming sardine-city.  Decision time:  to bolt or not to bolt.  Bolt won.  No, there wasn’t a stampede, but being squeezed in a huge throng like that is downright frightening.  We ended up back at 30 Rock where the view of the fireworks was enjoyed with some much-needed breathing room.

In 1884, P.T. Barnum — ever the showman — had “Jumbo” lead a group of 21 elephants across the span to prove the bridge’s stability once and for all.

Having received National Landmark status in 1964, the bridge today accommodates six lanes of automobile traffic and carries about 145,000 vehicles on a daily basis.  The elevated walkway is perfect for pedestrians and bike riders who want to soak up the great views and history of one of the world’s most enduring landmarks. 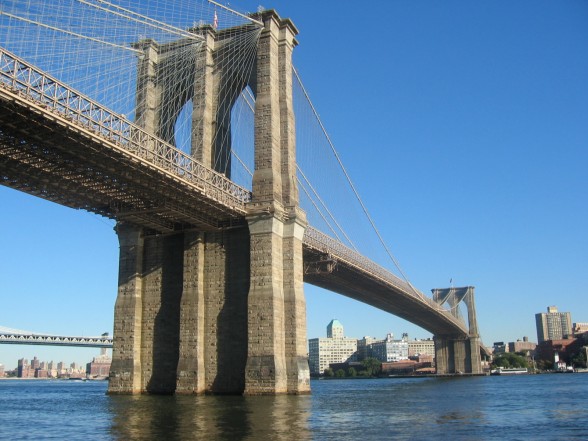