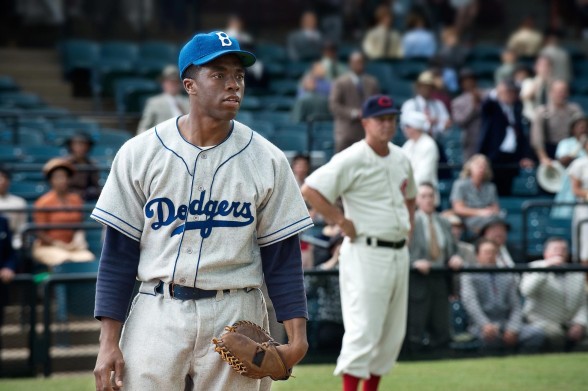 Once every baseball season — in both leagues, the National and American — players leave their jerseys hanging in their lockers and don the number 42 instead, in honor of the late Jackie Robinson, the man who broke baseball’s color barrier with the old Brooklyn Dodgers. The aptly-named “42” captures the tension and tumult of young Robinson’s first season with the team, in 1947.

As Jackie, newcomer Chadwick Boseman is a real find: whether grimly determined to succeed despite the overwhelming odds, finally breaking down after all the jeers and racist catcalls have proven to be too much for him, or simply enjoying a private moment of fist-pumping jubilation after his sweetheart, Rachel, has accepted his proposal of marriage over the phone, he is wholly believable every step of the way. (It also helps that he even LOOKS like an athlete.)

As Dodger general manager Branch Rickey, the baseball lifer who had the guts to sign him in the first place (partly out of guilt, as it’s ultimately revealed in a touching scene near the end), Harrison Ford — gruff, gravel-voiced, and bespectacled — is as far from space cowboys, heroic presidents and fedora-wearing adventurers as he is ever likely to get. It’s largely a deskbound role — Rickey, old and lumbering, doesn’t move around much — but he is as good as Boseman, maybe even better, and if Hollywood doesn’t remember the both of them come Oscar time (a tall order, I know; it’s nearly a year from now) there is, to paraphrase the old poem, neither joy NOR justice in Mudville.

Nicole Beharie is convincingly thick-skinned (yet also, when she has to be, achingly vulnerable) as the woman behind the man, Jackie’s loyal wife, Rachel; Andre Holland does fine work as Robinson’s Rickey-appointed “watcher”, black sportswriter Wendell Smith; and TV vet Christopher Meloni is effective as Robinson’s first big league manager (and staunch supporter), the combative and always controversial Leo Durocher.

Director/screenwriter Brian Helgeland hits the baseball sequences out of the park (the on-field action is some of the most genuine I’ve seen in a while), his script is gritty and real and even, on occasion, quite funny, and the period details — the costumes, the cars, the ballparks themselves — are wonderful.

Jackie Robinson’s story has already been told on the big screen, as far back as 1950 (in a film that starred Robinson himself). No matter. This is the kind of tale that bears repeating, and like a towering blast into the bleachers, “42” is — no doubt about it! — a home run. 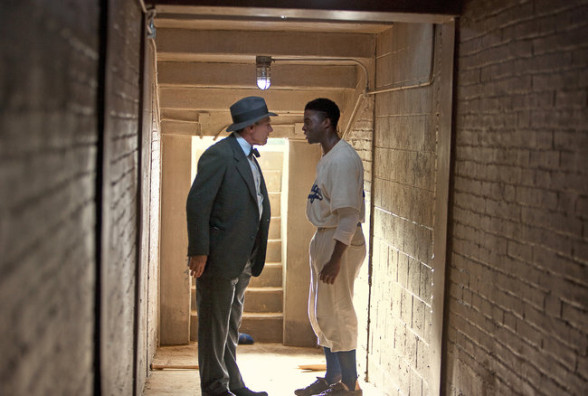