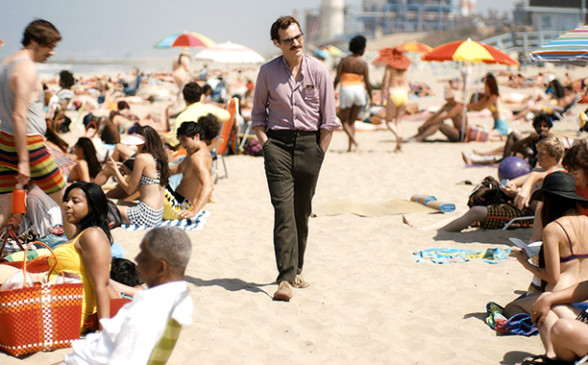 Just as original as Gravity–but decidedly more earthbound–Spike Jonze’s Her is about the ultra-high-tech operating system a lonely young man named Theodore purchases for his home, and (after deciding, on a whim, to endow it with the voice of a woman) the way he slowly, and remarkably, falls in love with it…or (as far as he’s concerned) her.

The system, you see, is so top-of-the-line, so sophisticated, so capable of responding appropriately to his every word and feeling, that it might as well be human, too.  At first, Theodore is merely amused by the way he can conduct real, honest-to-gosh conversations with…well…her; she is, in his mind, little more than a toy, much like the huge, holographic video game in his living room.  (The story takes place in a future in which such amazing technology is all too common.)But when he realizes how charming “Samantha” is (that’s what she calls herself)–how seductive, sexy, and even supportive she can be–his fierce longing for companionship takes over, and he begins to treat her like a girlfriend…and Samantha, sensing his need for a lover (even a disembodied one), alllows him to.  A trifle reluctant at first to ‘fess up to the bizarre turn his life has taken, he eventually admits who he’s “seeing” to his ex-wife, who scoffs, while his best bud (a woman)–lonely herself following a divorce, and with a high-tech pal of her own–understands completely.
.
As the lovestruck Theodore, Joaquin Phoenix is superb, turning in a performance of great subtlety and sensitivity.  With his oft-tousled hair, big glasses, soulful eyes and bushy moustache,  he is the very picture of the flummoxed everyman, pummeled by fate, beaten down by life, crushed by his inability to maintain relationships.
.
The pace drags a bit when the action shifts away from Theodore and Samantha; we want to see more of this quirkiest of romances, more of Phoenix’s tour-de-force performance (Samantha is never actually on camera with him, even when they’re “together”), not less.
.
Amy Adams is believable as always as Theodore’s pal (and looks so drab I hardly recognized her), and Scarlett Johansson as Samantha nearly steals the show.  (No wonder the poor guy falls for her–she sounds great.)
.
Thought-provoking and timely, “Her” raises viable, unsettling questions: How far WILL we go for love? Or to mend a broken heart, lift a sagging spirit? And ARE we on the verge of living in a world in which the loneliest among us–or even the not-so-lonely–will be able to carry on deep, abiding relationships with their machines?
.
It would have been easy for director Jonze (he also wrote the script) to turn the whole thing into the most tasteless kind of gigglefest.  But he didn’t. Her is a love story with a twist, beautifully acted and well-told. It might just take home some Oscars.
.
FILM REVIEW by Stuart R. Brynien