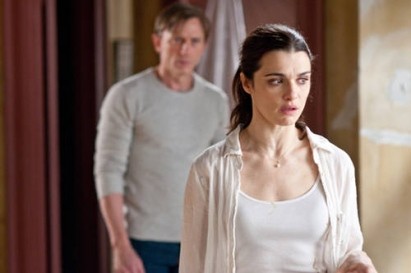 New Yorkers and tourists alike are queuing up to see James Bond—I mean, Daniel Craig—on Broadway. The star-studded revival of Harold Pinter’s Betrayal is a theatergoer’s (and producer’s) dream on paper. Take one accessible, oft-produced play by Nobel Prize-winning playwright Harold Pinter. Give the reins to celebrated veteran director Mike Nichols. Cast British stage and film actors with serious chops, (it’s especially juicy for audiences to see real-life couple Rachel Weisz and Daniel Craig onstage together). Even a cynical theatergoer would want to see what kind of production comes out of this well-constructed theatrical recipe.

Craig and Weisz play Robert and Emma, a married couple who have agreed to separate at the top of the play. Emma has learned that Robert had affairs throughout their relationship and in the first scene of the play, she meets with Jerry, Robert’s best man and her former lover of seven years, played by Rafe Spall. As the play travels backwards chronologically, we witness moments of passion, deceit, friendship and drunken honesty. Pinter’s menacing humor is in full stride in Betrayal and this production uses the humor—the quintessentially British subterfuge and stiff upper lippedness—broadly.

Craig’s Robert is charming, dark and slyly manipulative. A squash playing Oxbridge publisher who admits to disliking books, he wears a sweater coat well and drinks like a fish. He’s absolutely magnetic onstage. Weisz’s Emma is a shadowy wet blanket. Cold and matter-of-fact in the first scene, she hardly seems to be capable of the passion that brought her and Jerry together. And throughout the play she continues to be an absent presence onstage. Spall’s Jerry is funny, he’s bumbling, he’s not quite someone you imagine could have an affair for seven years without it taking a toll on his outside life. In the first scene, we see the toll that this affair has taken on him, as he prods her for information on what her husband has learned about their affair and mocks her for her newest affair with an author that he and Robert both know well. In the second scene, Jerry confronts Robert who tells him that he’s known about their affair for years.

By traveling backwards chronologically, we, as the audience, see the ways in which the characters’ decisions affect one another. Sometimes this is tragic and poignant, but most of the time it’s barely realized. It’s bubbling tension that never quite erupts.

Unfortunately, Nichols’ production of Betrayal suffers from overproduction. Gorgeous naturalistic sets glide slowly across the stage during scene changes while flies slowly ascend and descend. Projections depict gondolas in Venice and rowhouses in North London while helpfully telling us what year we’re travelling to. But Pinter’s play does not need pranic breathing between scenes. Rather than allowing the audience to ruminate on what they’ve seen, these gaps in action distract and bore us. Which is a shame, because Pinter’s story of complicated deceit should be anything but boring.