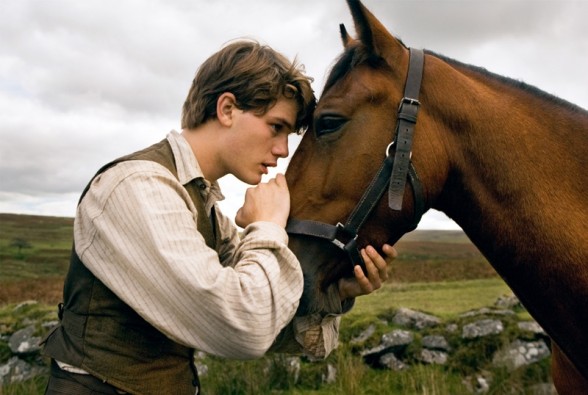 “War Horse” deals with an ugly, unsettling subject — the horrors of war — and yet, at the same time, is a perfectly fine movie for kids (at least older, more mature kids). The reason, of course, is that it’s based on the young adult novel of the same name by Michael Morpurgo. The other is that it was directed  (in full, dewy-eyed “E.T.” mode) by Steven Spielberg.
.[block_content]
And therein lies the movie’s biggest problem.
.
The story features Joey, a sturdy brown colt plucked from his farm in the English countryside to “serve” in World War I. Well, “plucked” isn’t quite the right word; his owner, an old greybeard of a farmer with money woes, sells the horse to the British army in order to pay the rent on his land.
. 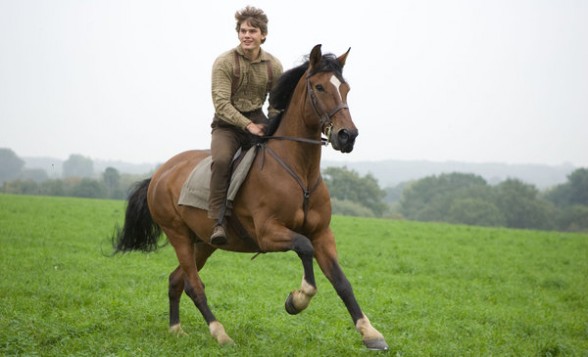 The problem: his son, who has been training Joey, doesn’t want to see him go. No sooner is the deal consummated than the boy, Albert, enlists. He and Joey won’t be fighting together (Joey is to be an officer’s mount), but Albert believes that with any luck — in a few months’ time, or perhaps a few years — they’ll be reunited.
.
Jeremy Irvine is very good as Albert; bright-eyed, tousle-haired, his love for his horse plain on his face, he is a country boy through-and-through. The rest of the cast — Emily Watson may be the most recognizable as the boy’s wise and long-suffering mother — is fine, too.
.
But it’s the horse, Joey — or, more precisely, the dozen or so “stand-ins” who play Joey — that steal the show. Whether giving Albert all sorts of grief while the boy is trying to train him (in a series of scenes that alternate between funny and touching), or lugging heavy artillery through muddy battlefields under the whip of his German captors, “Joey” turns in quite a performance.
.
But it’s the movie’s Disney vibe, it’s PG-13 rating,  that ultimately does it in. The horses are, undeniably, magnificent creatures; the sweeping views of the English countryside — a landscape artist’s dream, every one of them — are heavenly; and the battle sequences, so beautifully photographed, so brilliantly composed, are — in a word — hellish.
.
Unfortunately, Spielberg waits until the movie is more than half over to even begin to show us the brutality of war. Until then, “War Horse” has all the bite of a Hallmark card.  Spielberg agreed, I’m sure, to stick to the novel as closely as possible; in a way, I wish he hadn’t.
.
Maybe then, “War Horse” — half for kids, half for grown-ups, and one hundred percent for the entire family — wouldn’t have seemed so disappointingly . . . lame.
.[/block_content]
FILM REVIEW by Stuart R. Brynien