One starred the youngest Best Actress nominee in the history of the Oscars. The other starred the oldest. Both earned Best Picture nominations this year; one of them went home, instead, with the Best Foreign Language Film award.

Concluding my Oscar coverage for 2013, here are my (belated) reviews of “Beasts of the Southern Wild” and “Amour”.

“BEASTS OF THE SOUTHERN WILD”

The beasts in “Beasts of the Southern Wild” are small farm animals, the occasional gator, and enormous, pig snouted creatures straight out of a little girl’s imagination; the wild is the Louisiana bayou, a wooded
wilderness where the people live hardscrabble lives, the men drink heavily, and the school is a single room stuck in the middle of nowhere.

Among the residents of this ragtag little community are a sullen but spunky six-year-old namd Hushpuppy, and her angry, alcoholic, and often abusive father, Wink. It is their relationship — the mother, Wink
explains early on, simply “swam away” one day, although it’s never clear if she died, or, fed up with her husband’s wayward behavior, merely left — that lies at the heart of the story, which is told mainly through the
eyes of the girl. And what she sees is horrible: forced to use a blowtorch to light a stove (!) she watches their shack go up in flames; having upset her father yet again (when he happens to be around, which
isn’t always), she has to try to duck yet another angry blow; and — the incident that launches the second half of the film, and propels the story forward — when the levees break and Katrina storms in, she has to watch her entire town drift downriver like so much flotsam.

The acting is fine, although the script (by Lucy Alibar and Benh Zeitlin, who also directed) doesn’t give pint-sized star Quvenzhane Wallis nearly enough dimension; she steams and scowls throughout — we never see her happy. (Not that she had a whole lot to be happy about, but a little more depth would have helped. Was the diminutive Ms. Wallis worth a Best Actress nomination? I’m not sure.) Dwight Henry as WInk is painfully authentic, and the rest of the townsfolk look and sound so genuine that it was hard to tell if they were particularly well-cast character actors, or the real deal. (I’d bet on the latter.)

There’s no denying it: “Beasts” looks great. Unfortunately, it’s also somewhat formless — nearly plotless, in fact — with one gritty episode following another, right up to its somewhat head-scratching conclusion.
Maybe I just couldn’t understand its low-budget, indie, look-at-me-I”m-a-Sundance-winner appeal — just couldn’t feel the vibe — but a Best Picture nomination on top of a Best Actress nod for Wallis?

Perhaps Zeitlin’s next film will be more deserving. 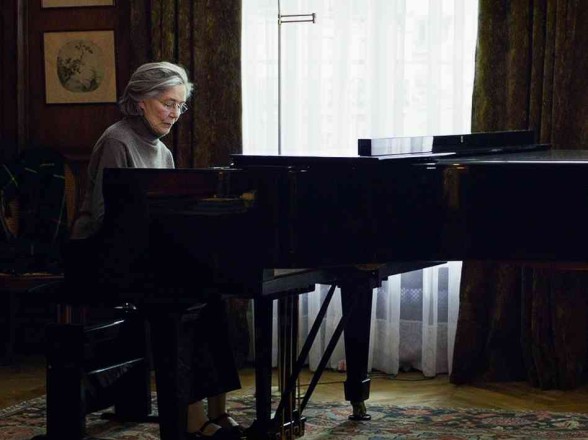 Emmanuelle Riva stars as Anne, an elderly Parisian woman with a wry smile and a twinkle in her eye who, shortly after the movie begins, prepares breakfast for her husband, sits down to join him … and suffers a stroke. Surgery and a hospital stay follow; by the time she returns home, she is partially paralyzed (though her mind is still as sharp as ever), and the inevitable downward spiral has begun.

“Amour” isn’t a plot-driven film in the conventional sense. It’s a painstakingly detailed look at the minutiae of daily living … and dying. We watch Anne’s painful journey from happiness to helplessness; we witness her husband’s plunge into heartbreak and despair. She clings to him as she hobbles along, trying to walk; she looks into his eyes for encouragement and approval as he assists her onto and off the toilet.

Riva (at eighty-six, the oldest Best Actress nominee in Oscar history) really plays two roles here: in the first half, when Anne is still at least somewhat mobile and enjoys the last vestiges of her independence,
Riva emphasizes her sense of humor and strength of will; by the film’s second act, when she is wheelchair-bound and bedridden, can barely sip water, and has been reduced to spouting gibberish and wailing out in
pain, she is, inescapably, another woman entirely. It’s a richly-textured, gut-wrenching performance.

In the less showy role of Georges, her husband, Jean-Louis Trintignant matches her every step of the way. Whole passages go by with nothing more to see on screen than brittle Georges sitting silently or puttering
around the kitchen, trying his best not to fall apart. (Indeed, the movie is filled with such moments.)

“Amour” (which, of course, means “love” in French, and there’s lots of love, and even loathing, self- and otherwise, in this film) is not easy to sit through.

My advice: give it a try.

Now that I’ve seen these two films — finally! — here is how, once and for all, I would rank this year’s Best Picture nominees:
1) Life of Pi
2) Argo
3) Django Unchained
4) Silver Linings Playbook
5) Zero Dark Thirty
6) Les Miserables
7) Amour
8) Lincoln
9) Beasts of the Southern Wild