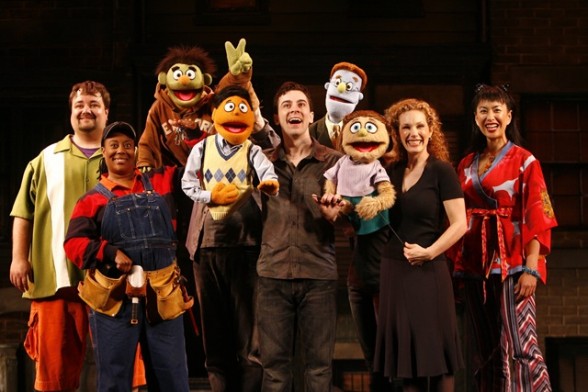 Still going strong at New World Stages — after a long Tony-winning run on Broadway — the musical comedy “Avenue Q” has, I’m happy to report, lost none of its charm.
.
Most of the characters, of course, are puppets, led by Princeton and Kate, a pair of easy-going twenty-somethings desperate to find a purpose in life.  He is a recent college grad with an English degree who has just moved into an apartment on Avenue Q; she’s a teacher’s aide who spends her days instructing kindergartners, even as she dreams of eventually being able to open a school of her own.  They meet and fall in love; when he refuses to make a commitment, she feels betrayed, and they break up. (In case you’re wondering if the break-up lasts, don’t worry; this is a feel-good musical, after all.)
.
In other storylines, Rod, a buttoned-down gay in deep denial, struggles to come out of the closet; Brian, a thirty-three year old stand-up tries to make ends meet by doing shtick at a neighborhood dive; and Nicky, Rod’s slacker roommate, ends up living in a cardboard box after Rod throws him out of their apartment.
.
The dialogue — cleverly written from first line to last — covers hot-button topics like racism and intolerance (though not in ways you’d expect), love and loss, and the basic human need to fully accept just who and what you are…and in an inspired bit of theatricality, none of the characters, or puppets, are ever onstage alone; they’re all manipulated (and voiced) in full view of the audience by a talented team of puppeteers who mirror the puppets’ reactions so expertly, so precisely, that they’re an absolute joy to watch. (Three of the residents are not represented by puppets, at all, but by real, live actors; they do a fine job, too.)
.
From Princeton’s opening lament, “What Do You Do With a B.A. in English?” (and what English major hasn’t, at one time or another, wondered the exact same thing?), to Act II’s philosophical “For Now”, the songs by Robert Lopez and Jeff Marx are a delight, the Tony-winning book by Jeff Whitty is chockful of terrific one-liners and, at the same time, genuine feeling, and the direction by Jason Moore keeps the action moving, and the jokes flowing, smoothly.
.
Though “Avenue Q” has been around for awhile (since 2002, to be exact), it is as funny and touching and timely as ever.  Stop by if you can.  It’s well worth the visit.
.
(A word of caution: “Avenue Q” may be a Sesame Street-style puppet show, but it is NOT for very young children.  Forget about the occasional F-bomb; it’s the five or ten minutes, late in Act I, of — you have to see it to believe it — boy-on-girl hot puppet sex!)
. 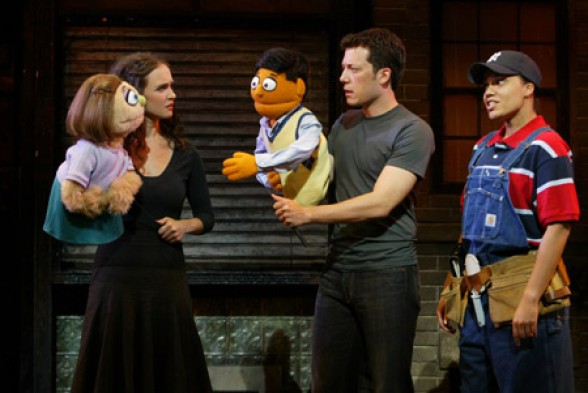