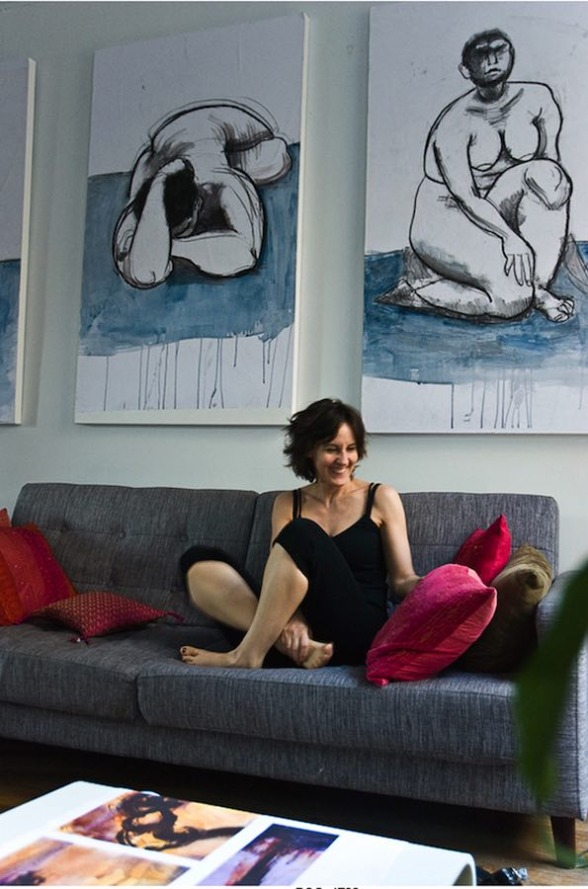 On Thursday, March 5th, I attended the opening of “Art from Detritus” at the Viridian Artists Gallery in New York.“Art from Detritus” was conceived by artist/curator, Vernita Nemec, who is also the director of Viridian Artists Inc. since a National Recycling Coalition convention in 1994. Besides showing concern for our environment and the creative use of trash, the exhibit also reveals ways to use our abundant refuse as a solution for the artist unable to afford expensive materials and equipment with which to create.

Before the opening began, I met and interviewed one of the “Detritus artists”, Valentina Celada, who was born in Sweden, grew up in Italy, and moved to NYC at age 27. After studying Fine Arts in two artistic cities, Rome and New York, she went on to study mask making and special effects for film and theatre and entered the theater world working at Lincoln Center with New York City Opera for several years, and at The Metropolitan Opera since 2003. Valentina had her first solo exhibition Figuring It Out in New York City in May 2010 at 255Canal Gallery. Since then she has participated in a number of art shows in New York, the most recent of which was Celebrating Women’s Work at The Pen and Brush Gallery and has been producing video animation pieces and illustrations for various projects.

Lorenzo Lars Vallot: First of all, thank you for having us tonight. You are a sculptor and a painter. Which one do you consider yourself predominantly?

Valentina Celada: Both. I’ve always loved sculpting, and I think it’s a fundamental base for drawing. When I was studying figure drawing in Rome, the teachers would always tell me my drawing was very sculptural and three- dimensional. I feel I’m sculpting the mass and shaping the form even when I approach the flat surface.

LLV: You studied both in Rome and New York. How did this influence you?

VC: Living in Rome is magical and curious. You are surrounded by the most wonderful art and history, so you walk around absorbing all this beauty, which forms you as an artist, but at the same time you are overwhelmed by all this, and it can hold you back from finding your own artistic identity. I began sculpting in Rome in the most traditional fashion, copying the Greek and Roman classics. And that was very formative. But it was only when I moved to New York that I felt liberated, and I allowed myself to find my own voice as an artist and become more productive. Experimenting with new techniques and materials, like sculpting with wire and plastic bags, allows me to loosen up the form and become more expressive in my work.

LLV: I’m a Lincoln Center habitué, and I know you are working as a theatrical makeup artist at The Metropolitan Opera since 2003 and at American Ballet Theatre for several years. Do you think this experience helped you in developing your craft and taste?

VC: Yes. I think both activities inform each other. Stage makeup is closely related to painting and sculpture, as they are the basis for creating the characters’ look and making them come to life.  And for an artist, the theatrical experience is invaluable: it trains your eye to judge visual composition and to realize what works and what doesn’t in terms of composition, color interactions, perception of depth and even in the way sound and visual experience influence each other.

LLV: Every artist has a different idea about art. What is yours?

VC: When the role of representing reality was overtaken by photography, art had to emphasize a more evocative role:  expressing feelings and emotions. That is what I’m interested in and what I strive to achieve in my artworks. I am not interested in faithful and controlled representation of external reality. Let’s leave that to photography. So in my painting and drawing, for instance, I use long sticks, at the end of which I secure brushes and pencils, and I draw while creating a distance from my drawing in order to bypass the rational brain, so that the art can be spontaneous, loose and free. And in sculpting, I strive to represent mostly the movement, the intention, the emotion.

LLV: This year is the 20th Anniversary of “Art from Detritus.” How long have you been working with them?

VC: Vernita Nemec, the curator of “Art from Detritus” has been the curator of the show since 1994, and I had the pleasure of meeting her in 2011, when I saw the first “Detritus show” at WAH Center in Brooklyn. The beauty of it shocked me. It was a gorgeous show. And it happened that I’d just finished my “bag-man,” which was the first sculpture in the series made with plastic bags, done for another show. Before it was sold, I showed it to Vernita, who said, “You must be part of the next Detritus, so we’ve kept in touch until this time.”

VC: Transfixed is part of a series of sculptures stemming from my desire to create something beautiful out of our ugly and uncomfortable refuse, as a manifestation of our collective conscience, which is heavily burdened by the amount of packaging invading our daily lives through purchasing our products. Our garbage does not just disappear into the void as much as we would like it to and “transfixes” us and other living beings and their ecosystems on this planet. I started creating art with this recycled material in 2010 after seeing the movie Bag It at the Lincoln Center Festival. This documentary tells the story of plastic bags and other plastic containers we use everyday, the process of making them and where they eventually end up in the environment. I was truly touched by the movie and decided to organize a public screening of it in a gallery, followed by a panel discussion with environmental experts. Bag It inspired me to create Bagman, the first in the “environmental” series, exhibited at the Pen and Brush Gallery. I believe that works of art made of rubbish not only carry a message of denunciation but should also inspire us to use creative and positive energy to counterbalance our destructive force. For Transfixed I used a very classical pose, realized with an extremely modern technique. It’s reminiscent of the “Dying Gaul” or the “Pietà”, yet covered in colorful plastic film. When I started creating this, I also had in mind the movie The Night of the Shooting Stars by the Taviani brothers.  In particular, the scene “the battle of the wheat” where the Fascists and the Partisans are fighting in the field and, suddenly, when one of the soldiers is shot to death, he becomes a sort of Roman worrier transfixed by many spears and falls to the ground.

LLV: How do you see yourself in the future?

VC: I want to continue my exploration of form in movement, both in painting and in sculpting and discover new ways of representing the figure. Lately, I’ve been experimenting with a kind of “permomative” drawing. Sketching people while they dance or play music and letting their artistic performances influence my own work. I am also interested in stop motion animation and plan to continue to animate my drawings through video and sound compositions.

LLV: We look forward to seeing your next projects. Meanwhile, we can see Valentina Celada’s Transfixed and the entire collection “Art from Detritus” at the Viridian Artists Gallery in Chelsea. 548 West 28th Street, # 632, New York, NY 10001.

The exhibition will run until Saturday, April 4th. 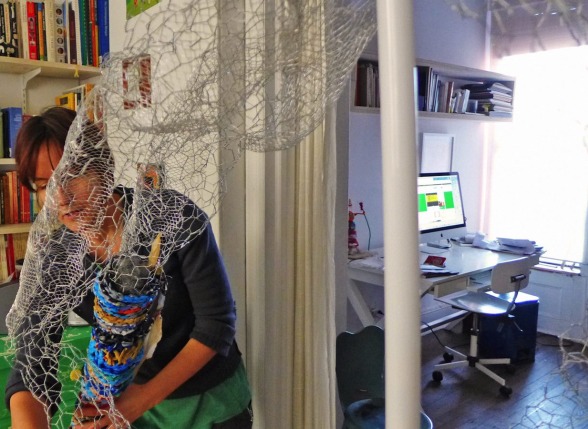 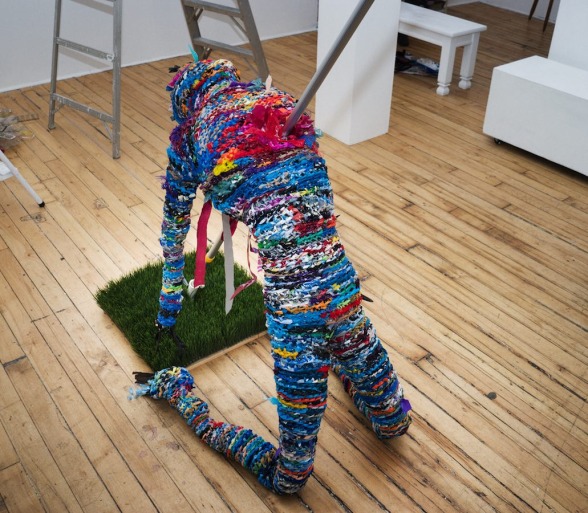