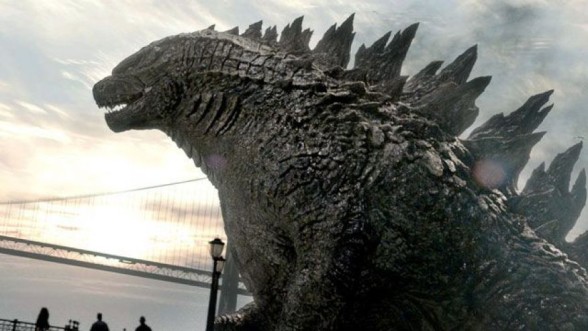 The newest  Godzilla  isn’t a great film–not by a long shot–but it’s not as laughably bad as its detractors are claiming, either.  In fact, it’s consistently entertaining…flaws and all.

The star, of course, is the Big Guy himself, the King of the Monsters–taller, nastier, and somehow even scarier than he’s ever been before. (Kudos to the designers for creating a Godzilla that puts most of his cartoonish-looking predecessors to shame.)

Bryan Cranston lends his support as a nuclear engineer based (where else?) in Japan; after a meltdown at the plant kills his wife, he becomes, over time, a rabidly anti-nuke, anti-government conspiracy theorist.  Fast forward fifteen years, when his estranged soldier son–now all grown up and with a family of his own back in the States–is summoned to Japan to bail him out of trouble; loudmouth Pop’s been arrested again for his controversial (some would say crackpot) views.  But then a giant, praying mantis-like creature (or MUTO–Massive Unidentified Terrestrial Organism) suddenly surfaces, its mate also pops up, Godzilla rises from the depths of the ocean to set things straight–and before we know it, the three of them are stomping and soaring (one of the MUTOS can fly) all over the place, reducing everything before them to rubble. (The good news: because all the mayhem is set out west, we finally have a disaster flick that DOESN’T feature New York City getting smashed to smithereens.)

Cranston, reliable as always, is terrific.  Unfortunately, Aaron Taylor-Johnson as his son is all square-jawed machismo and blank-faced heroism; Ken Watanabe as a Japanese egghead gets to spout a lot of furrow-browed exposition; and the normally excellent David Strathairn, as the American military officer in charge of the man-vs.-monster battle, gives it his all but can’t quite overcome some of the clunkiest movie dialogue of the year.

People flock to blockbusters like this for the special effects, though, and director Gareth Edwards and his team have come up with some doozies.  Rarely has urban devastation looked so thorough, so believable: the ruins of once-proud buildings dotting smoky gray landscapes like empty shells; sky-high floodwaters crashing in, obliterating everything in their way; bridges collapsing like so many broken toys.  And, of course, the monsters themselves, big and loud and nasty enough to give you nightmares for the next six months.  (Think long and hard about bringing the kids, especially if they’re young.)

So what if Godzilla doesn’t make his first appearance until sixty minutes in? Or if an entire subplot involving a mega-bomb that’s supposed to kill the beasts turns out to be little more than a maguffin? Or if a good many of the lines are as wooden as the actors delivering them? Or if the final moments (yes, I admit it) DID make me giggle, just a bit?

Bottom line: I couldn’t take my eyes off the screen–and that, I think, counts for something.